I'm not a big fan of time travel, unless writers like David Weber and Jacob Holo throw down a clinic on how to do it, and do it right. They take a big risk on the rule about likable characters, because our protagonists are anything but on first meet. They're part of an organization tasked with observation and recovery. As the curtain rises, they've arrived to plunder the Library of Alexandria, bullets flying and blood galore. So what? they reason. By going back a day earlier and waiting for time to catch up without incident, they've ensured no tampering ever happened.

Ah, but it has--in the alternate timeline they just created. Sixteen universes are now entangled in a Gordian knot. That's the one Alexander the Great had to undo if he wanted to be master of the world. As "undo" isn't strictly defined, he simply cuts it with his sword. Our heroes must do the same, or the whole cosmos goes kablooey (but of course). First, they have to find it: that one event that set the whole mess in motion, and they're gonna need help.

They return to their base in the 28th century, only to find it altered. It's now an oppressive dictatorship. After an escape we never saw coming, they set off into the past, pursued by an armada of warships. The enemy, you see, is painfully aware that cutting the knot means they never existed.

The real stars aren't even human: the spunky time ship and its intuitive AI, which can take a desperate command and run with it, to whit--gettin' the hell outta Dodge. The hardware is impressive, the battles top rate. Where the enemy has a Freudian thing for missiles, the fugitive ship is the Doc Holiday of flying pistoleros. There's nothing like the sound of a wowzow, buzzsaw-on-sheet-metal chain gun, spent shells raining down by the thousands.

Clever escapes abound as the pursuers herd them into smaller and smaller blocks of time. That sets up the blazing showdown pitting the plucky crew against the entire fleet--or what's left of it at this point. It's a tale worthy of the "time" investment, which in my case was two days. Just couldn't get away from it. 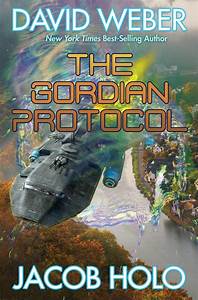 Posted by Nick Nuko at 6:02 PM
Email ThisBlogThis!Share to TwitterShare to FacebookShare to Pinterest