Child of a Lonely Star 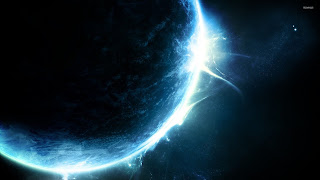 They dubbed the mystery ship "Evil Twin"; not that it showed evil intent, but for being a half-scale copy of Orchidia. It didn't even survive its journey from the Aldebaran system. Other ships within Pluto Station backed away, weapons aimed, as the visitor began to wilt and come apart.

Portly Admiral Jacobs gaped out the panoramic window of Central Ops. "A plant? That thing is a plant?"

A junior officer hunched over his terminal, rapidly pulling up scans. "Mostly, sir, with enough metals for a drive unit. No one thought biologicals could bond with metal at the molecular level. It's almost like. . . ."

Jacobs paced, watching enviro units clean up the mess. "Call up the file on Commander Moast's mission to Aldebaran."

Seconds later, the young man had the highlights. "Two crewmen died on the surface. When their duplicates tried to fly their shuttle back to Orchidia, Moast shot it down. He was about to launch a planet buster when the surface displayed colors the AI interpreted as contrition. He listed the system as of no interest, and recommended quarantine."

"Wait one," the lieutenant said to an incoming message. "Admiral, Commander Moast requests clearance for departure to the Aldebaran star group."

"By all means," Jacobs said. "I can't wait to hear his explanation for this." 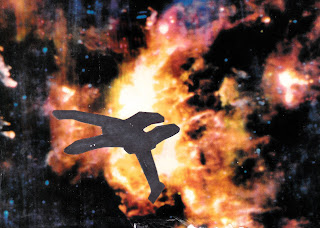 Orchidia exited the Aldebaran portal at a risky clip, artfully weaving through the asteroid belt. The Builders had a penchant for hiding the portals until the natives achieved space travel. Several hyperjumps shortened the trip toward the orange giant star and its only known planet until now.
At eleven times the mass of Jupiter, Aldebaran B orbited too close to the star to support life. Not so for Aldebaran C, sheltering in the umbra of B. Refracted light gave C a permanent state of twilight.
"Nuke me sideways," mused bearded navigator Chet.
The muscular helmsman Berl agreed. "No way that happened all by itself. "
Moast swiveled toward Science Officer Preston. "Seems like we're expected, Kyra. What do you make of those colors?"

"Joy," she began. "Hope, curiosity. And a proposal." She studied the spectral scanner. "More complex now. We'd better bring in the AI."
Moast had speculated how the planet wanted to use his ship for seeking out and bringing other life here. Had that changed? The threat of a planet-smashing weapon still hung over the entity's head. "Orchidia, analysis."
"No ethical center is apparent beyond cause and effect reasoning. Spoken language is an alien concept. Until our first visit, there was no awareness of other life. This has engendered loneliness. Stand by." After a pause: "Based on contact with the deceased crewmen, there is curiosity about touch."
"Commander," Kyra said, "you aren't planning on going down there. . . ."
"Not a chance. I propose a neutral ground. Orchidia, modify the orbital station as a culture center. Make sure the TV shows are free of propaganda, virtue signaling, and hypocrisy. Ready an android to serve as guide and companion. Instruct the entity to assume a form suitable for boarding."
Kyra's lips pursed in dismay. "You're going to meet her face to face? It's insane."
"I'm reminded of a line from a poem: Intrepidly into the void, I trow."
"Trow?" Kyra looked up at the holo emitters. "Orchidia--"
"I trow: I speak truly. It is easier to pronounce than 'troth', which in turn requires fewer mouth muscles than 'truth'. These are examples of lazy speech that gives rise to dialects."
Moast entered the turbolift. "If the vocabulary lesson is over, we have a culture center to inspect."
"There's an end game to this. We aren't out here to entertain a sentient planet."
"We have a chance to learn how planets form. because this one can tell us. And a ship in distress can get parts conjured up quick. Temporary, maybe, but enough to see them home."
"If this entity can be trusted," Kyra reminded. She followed the commander into the corridor leading to the hangar deck. "Moast."
He stopped and looked back.
"We can get all these things without so much risk."
"You're convinced I'm going to take one?"
"Taking risks is how you came up the ranks. But this. . . .why?"
Moast shrugged. "Never held hands with a goddess before."

Posted by Nick Nuko at 4:53 PM
Email ThisBlogThis!Share to TwitterShare to FacebookShare to Pinterest