Logistics Across the Void 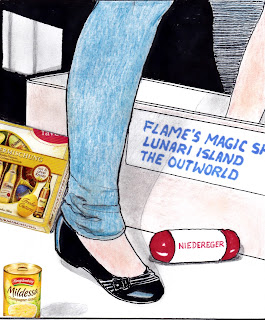 Flame's Magic Shop soon outgrew its space in the marina district. Specialty imports from the Earth dimension moved faster than pricey potions and talismans, though the imports weren't exactly cheap due to limited supply. Restocking only happened when Ed visited courtesy of Wicca's ability to cross the dimensional plane. Normally he'd bring fast food, coffee, and the Sunday paper for his teammates up at Team Dan's villa. But the success of Flame's enterprise--which Bonnie and Zena had bought into--required crates of goods on a regular basis. The return trip brought an equal amount of. . . .trash.

The dwarf Hecabano scowled at the lawn-and-leaf bags. "Is this necessary, Mistress Flame? Can you not burn or bury it?"

Flame, nee the blood banker Judy from an earlier life on Earth, was among many fellow laboratorians who'd made the relocation permanent. The moniker reflected her orange bob, made more prominent by black glasses. "Dan's rules. See for yourself."

One of the green skinned islanders in colorful wrap laid down coins for a small coconut pie, the kind travelers on Earth picked up as an afterthought at gas stations. A hired attendant removed the clear wrapper and tin foil bowl, dropping them into a bin. The happy recipient placed the treat in a covered crock for transport to her master's abode.

"And there you have it," Flame said. "We don't want cans and paper littering the beach." She pulled down a ledger. "I sure miss computers. Let's see--here's the gold for this delivery."

Hecabano pocketed the sum, to be used for reordering on Earth. He looked over the order list: perfume, specialty foods, sodas, and an item that gave him pause. "Magazines? Do they not become trash?"

"Not really. We make them turn in the old one for a new one. But there are pages missing: they sell 'em as status symbols. One guy has a liquor ad framed on his wall!" Flame surveyed giddy patrons enjoying carbonated drinks. They had to be chilled by magical means, that being done by a youth whose prowess was limited to minor cold spells. Just part of the overhead. "Where's Ed?"

"At the beach with Bonnie and Zena, who are getting rich on their shares in your stock." 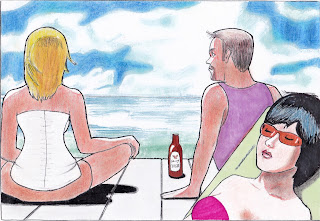 "I suppose," Flame went on, "that scary vampire is visiting the other Brides on Rotbone Island."

"Cambris has a thing for neatness. I don't envy the count, who continues to blame Dan for having these women inflicted on him." 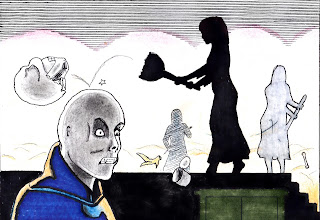 Hecabano smirked. "She also craves to know what lies in the frozen north, what evil threatens this world as it does Earth, whose time is rapidly running out."

"I heard about that," Flame said, resting elbows on the counter. "Ed has a crazy idea of putting together his own team. As if the Dans will let him go there on his own."

"Precisely his plan to get them back in action, Mistress Flame. They were not fated to be mere merchants, growing lazy on their clientele."

Flame looked at him askance. "You trying to say something? There's nothing wrong with dropping out of the rat race."

"I am in agreement." Hecabano flexed brawny arms. "It has been too long since I swung my axe."

Posted by Nick Nuko at 8:03 AM
Email ThisBlogThis!Share to TwitterShare to FacebookShare to Pinterest