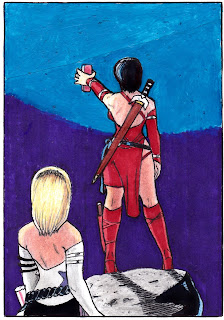 Zena swept her pad across the majestic vista from atop the Well of Souls. Lunari had no internet, of course, but the pics could be downloaded to a portable printer at the villa. Selling them was yet another way to pay the rent for two girls fond of shopping. She dropped the pad into a pouch. "Do you think Ser Magus will ever sell us the villa?"

Zena sat cross-legged on sun-warmed stone and punched up an Elvis tune she'd grabbed during the last visit to the L A studio. The jazzy strains of Such A Night caught the attention of some admiring tourists farther down. The inevitable reporter joined them, holding up his scry globe to record the scene for the evening news. Team Dan, after a long hiatus, was jumping somewhere into the dark realms.

Amused at how Zena played the crowd, Bonnie squatted beside her. "Dan is sure taking his time with the oracle. He must be worried about our mystery team member, whoever that is."

"Like I'm not worried. We've got Cambris and Stheno on call." She referred to a vampire and a gorgon. 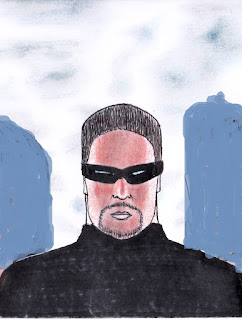 Cold air rushed up from the forbidden depths of the mountain. Along with the  moan of currents came the tinkle of wind chimes on a lower ledge, where coins tossed by supplicants were gathered.

The old green-skinned Lunari woman studied Dan across the small table. "You have been strange places, Ser Dan--including the magical reaches of this mountain, where none have been before."

Dan laughed. "Long story. It involved escape from a floating city by conjuring an ice elemental. This was her link from the fairy plane." The oracle seemed troubled. "Problem?"

"Your new team mate. She seeks redemption at any cost. I see fighting among your own."

An intra-team rumble? Given their talents and weaponry, that couldn't end well. "I may have second thoughts about that."

"Nay, team leader Dan. The girl is more important than you know. Give her this quest."

Dan sighed. "Okay, then I'll eat my doubts." He rose and approached the fenced edge of the void, making sure the oracle saw his generous offering as the coins glittered out of view.

Just outside the pavilion, a figure stood up and threw off her shrouds, coming out of the stealth spell, revealing Jili of Khot.

"Well," Dan said, "as I live and breathe. At your discretion, that is, being the world's top assassin." Despite wanting to look cool and collected, he pushed at his shades. "I suppose you heard that." And made sure he knew it.

"Redemption has no price tag. I don't see a problem as long as we're agreed." She made her way down one of the trails, skillfully blending into the environs even without stealth magic.

"That's just what worries me," Dan muttered. Jili hailed from the dark realms. She wielded twin swords with unmatched speed, was a mistress of poison, even reanimated fallen foes to command. Add to that impressive list a skeleton familiar with its own mystic weapon.

"Dan!" Zena, modeling her own shades for the fans, sauntered up a side path with Bonnie. "Was that Jili? I can't believe she's doing a gig with us."

"Strange but true," Dan said, arms crossed as he contemplated marbled skies. "For one thing, she has the teleport code."

Dan turned his shades to her. "Well, in this case, she grew up on the floating city we're going to. Let's get over to the Archonage and go over final plans." He didn't like that word "final".

Posted by Nick Nuko at 8:09 AM
Email ThisBlogThis!Share to TwitterShare to FacebookShare to Pinterest