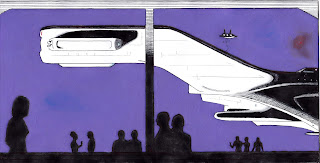 Pluto Station lay beyond its namesake, a moon-size hollow sphere not intended for discovery until man had ventured out this far. Its vast interior floated hundreds of ships vying for riches via one of the thousands of portal hubs. For the first time, something had come through from the other side; a sort of ark sheltering the last 2,642 representatives of their race.

Commander Donny Moast entered the op center and scanned the four faces at the table. Portly Admiral Jacobs and First Officer Kyra Preston flanked a pair who were remarkably humanoid, save for nose ridges, deepset eyes, and only four fingers. Jacobs introed them as Captain Doinhu of the Covectis, and his science chief Vreemid, a woman similar enough to be related. Unless they all looked the same.

"Sorry I'm late," Moast said, taking the seat next to Kyra. "The new phase induction laser took longer to calibrate than we thought."

The admiral smirked. "More weaponry? Your AI has amassed enough to blow us all to Andromeda. She's paranoid, I tell you." Both visitors appeared heartened by this.

"My apologies," Jacobs said to them, activating the viewer to display a star chart. "Doinhu, let's get your story again for Moast's benefit. He's taking Orchidia in search of your persecutors. They sound like people we don't want showing up here."

"A hundred and ten of your years ago," the shaggy-haired Doinhu began, "our world was destroyed by kinetic weapons that came from nowhere. Our colonies were wiped out, our sun turned nova. We alone escaped in that old ship."

Blonde Kyra paused entering notes. "Your numbers haven't increased much in all that time."

"On purpose," the equally shaggy Vreemid put in. "We found a gas giant to mine for resources, but never settled on a planet; we could have been caught the same way and annihilated."

"Rough," Moast agreed. He followed their gaze out the wide window where Orchidia floated serenely amid a dozen supply and refit shuttles.

"It is quite a ship," Doinhu said to Vreemid. "Like a krakul ready to strike." The translator device lagged briefly, settled on swooping dragon.

Kyra made another entry. "You've no idea who this race is, where they came from, or their motive?"

"That last," Doinhu said, "I can answer. A survey ship orbiting our own gas giant transmitted that information to us after receiving it from the aliens, as the survey ship was disintegrating. The aliens consider all other life a threat."

Jacobs drummed fingers in thought. "What happened to that ship?"

"The transmission itself," Vreemid said. "The photons reassembled into nanobots that devour all matter."

Moast crossed arms in a show of confidence he didn't feel. "Then we'll avoid that mistake. It's why I'm hoping you'll come along as advisors." The visitors nodded enthusiastically. "It's time to consult the fastest quantum-shift computer in existence. Orchidia: findings."

"Visitor origin is constellation Eridanus, solar system of stars Achenar A and B. Data on Alpha Eridani A: blue main sequence star of magnitude 0.46. Right ascension: 3.25. Declination: minus 29. Radial velocity plus 16, which flattens the poles. Parallax: 23.39. Absolute magnitude: minus 1.46. Luminosity: 3,150."

"Proximity to the Eridanus Supervoid."

Jacobs slapped the table. "There it is. I don't know how, but where else could an attack come from nowhere?"

"But. . . ." Vreemid looked perplexed. "Nothing exists there; no stars, not even dust."

"The void is conjectured to be a quantum entanglement of universes. If the problem originates there, capture of an attacker is mandated to isolate their home system."

"Capture one?" Vreemid went paler than her normal shade of light violet. "We don't even know what they look like--only that their ships are the same design, a sort of black wedge."

"Enemy wedges display hyperlight drive, but are not known to hyperjump. Weaponry is comparable to ours, yet quickly expended, necessitating mass formations. Vector trace of kinetic weapons leads to the void."

Jacobs had heard enough. "Find their home system, Moast. You know the rest."

Posted by Nick Nuko at 9:03 AM
Email ThisBlogThis!Share to TwitterShare to FacebookShare to Pinterest