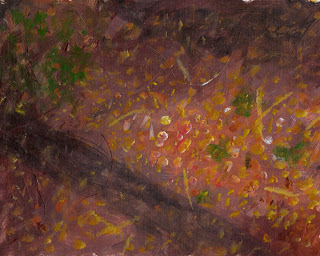 I'll briefly pause the space opera for some new art ideas. This wouldn't do for a stand-alone work, but shows how detail areas of a picture can be handled. It would be a small area of the total work, so not much detail is called for. Create a patchwork ground with multiple earth tones, then stipple in some leaves and grassy areas. Shadows can be done with a thin wash of black, which some painters would be aghast at; but as a side area of the picture, it doesn't draw a lot of attention, aside from making its mark on the whole. You can even toss in some thread as handy curved twigs. Note how leaves in shady areas don't show much color.

Posted by Nick Nuko at 5:48 PM
Email ThisBlogThis!Share to TwitterShare to FacebookShare to Pinterest