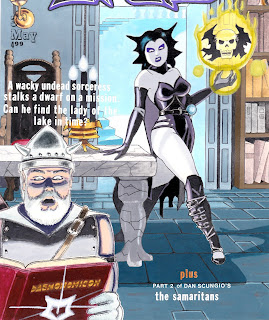 Back in the day before graphics programs, everything was laboriously done with stick-on letters. They probably don't make them anymore, except for the large size commercial types. This features two familiar characters--Hecabano and Wicca, who has been pictured before using the Flying Skull spell. As far as where this part of the story takes place, it's where the dwarf ascends the Tower of Sorcery, tapping into a treasure trove of magic items. But the hibernating Lord of the Dead doesn't like it, counting on his minions to protect the place.

If you can do your own comics, there's no sense in not doing your own cover, since it saves a bundle on production costs. This one was done on a laser printer (very expensive), and it's one way to get yourself in print--even if only friends and relatives ever see it. Acrylic is used here, with black and white edges to give the tiles a 3D look. So does the dwarf escape? Yep--the spell hits one of the bad guys and shrivels him up like a mummy.

Posted by Nick Nuko at 11:26 AM
Email ThisBlogThis!Share to TwitterShare to FacebookShare to Pinterest