A Vampire Comes to Dinner 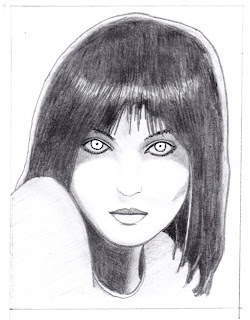 Eric kept a brave face during Thanksgiving dinner with Auntie and his visiting granddad. Aside from the unpleasant news he had for them, things were going well: he was a junior with a major in art history, had his own pad, even a potential girlfriend. Ironically, it was his art talent that led to the Dracula Brides being saved from extinction, to their escape to Outworld--beginning with the one he'd inherited from Gramps.

They sat around Auntie's small living room, where Gramps sprawled in the recliner. "Washed-up athletes pimping insurance and reverse mortgages. Sad!" His pique shifted to Eric, seated next to Auntie and her perpetual white pony tail. "I know what's eating you, boy. It's Emmy--isn't it." Auntie started, bringing a hand to her sternum in matronly dread.

"She's coming here," Eric blurted, which brought Auntie to her feet. "Be cool now--she's changed. I taught her sign language. She'll be able to explain some things you've always been bothered about."

His lion tamer act, handed down by his predecessors, had made Emmy a spitting, hissing terror that first day in Auntie's basement. Only crosses and mirrors enabled anyone to venture there after dark. Auntie boycotted it all the same, doing laundry at a laundromat, ill-assured that Emmy was bonded against any harm to the Harker clan.

Eric gestured for Auntie to sit. "We'll get to that, Gramps. It was her idea to come here instead of just sending me a message. I'm sure it'll make things easier once you hear her out."

"I knew it would happen," Auntie lamented. "That demoness has led you to perdition, just like I said she would!"

"Auntie, please. You were going to stake her one day, and you're still alive."

Gramps had loosened his belt in the "fat and sassy" tradition following a feast. "Don't remind me. She called me on her cell, blubbering about being cornered down there. I told her to pass the phone to Emmy, and somehow convinced her to let your aunt go. Didn't know it at the time, because it sounded like the phone got crushed."

"Close one to be sure." Eric nodded. "I set the coffee mug down there so she could have a last look around." In mist form, vampires could shelter against daylight in a dark canister. Eric had requested the coffin crate to remain, along with Emmy's original white gown and slippers. Since it was now dark out, he braced himself. "Okay, Emmy."

Gramps jumped up and stood beside Auntie when Emmy glided in. She wore the gauzy black dress she'd purloined from a professor's wife, shortly after Eric had freed her from the centuries-old bond. Perhaps to put everyone at ease, she took the vacated recliner with a short flurry of sign.

"She wants you to sit," Eric explained. He watched her sign again. "I'm not sure what she means--something about your late wife, Gramps."

"How she drove her mad?" Auntie charged. "--drove her to an early grave? She was my sister, you know."

Eric translated the indignant response. "Your wife got curious, Gramps. Just had to see what was in the crate. Emmy couldn't easily move, even in the near darkness, but she stared hard at your wife, who ran out in hysterics." More signs. "And that fishing buddy of yours that turned up dead--he crept down there one day and got a little personal, as long as his nerve lasted under that stare."

"But how?" Gramps demanded. "We were setting up at the lake just after sunup, miles from the house. She'd never have made it back!"

"It was Emmy who came up with the canister idea. She had it pre-positioned, lured the man into a grove, and had a little revenge. Then it was into the canister."

"Well I'll be dim-damned." Gramps stroked his jaw, sinking onto the sofa next to an amazed Auntie.

Emmy's burning eyes settled on Eric, whose resolve looked to be failing. She came to sit on the coffee table's edge, obliging Eric to restrain the elders from a hasty exit.

"Look here, girl." Gramps drew defiance from Eric's presence. "You got your freedom. What more do you want from my grandson? I'm looking forward to great-grandkids, and they don't need any Aunt Dracula."

"Then let's have it," Gramps went on, undeterred. "What does she want?"

"She wants me to relocate to Outworld--permanently."

It took a full minute to get the oldsters calmed down. "I don't expect you guys to understand. There's this prophecy from the Sybils at Eolca. They say the home world doesn't have much longer to go. At least not the way we've always known it."

Silence ruled for a space, and it was clear the elders couldn't bring themselves to believe it.

"Why?" Auntie said simply, looking near tears. She ventured to actually touch Emmy's cold pale hand, her look going resentful. "Tell me what went on during those nights in the basement!"

Through sign, Emmy related her confusion at Eric's persistence in spite of his fear. It wasn't curiosity of a freak, but a genuine desire to get to know her. Emmy struggled with her own temptation at the beckoning pulse so close at hand. Through chalk marks on the concrete floor, he'd elicited the name of her village; showed her magazines; introduced the wonders of music via headphones. And then--she displayed the pencil portrait that allowed her to see herself for the first time in seven hundred years.

Eric made a self-conscious grin. "She never lets that out of her sight."

Gramps put and arm about Auntie with a sigh of the inevitable. "What'll you do over there, runnin' with a crowd like hers? How soon do you end up sleepin' in a box?"

"Nothing like that, Gramps. She's a mom now. . . .adopted, of course; a boy who will forever be a boy if nothing happens to him."

Auntie had turned sullen at this "woman" who was taking her nephew away. "When do you leave?"

"In a few days. You won't see Emmy after tonight. She has some. . . .last minute business here."

"Eric--" Auntie glared fearfully at the vampire. "You made her agree to keep her. . . .urges. . . .confined to cattle at a farm in the Hamptons."

"Not anymore, I'm afraid. When the ship is going down, you get satisfaction from the idiots who ran it into an iceberg. You'll be seeing it on the news, and it won't be pretty."

Emmy rose, dissolved to a creeping fog, and flowed out a partly-opened window. Bad news had come to town.

Posted by Nick Nuko at 5:14 PM
Email ThisBlogThis!Share to TwitterShare to FacebookShare to Pinterest