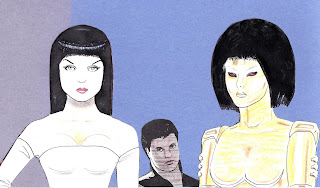 Previous The Bot Queen, vampire Cambris, and tha avatar of starship Orchidia convene to figure out a way for the ship to return to the future. Young Eric has been sent back to New York.

On the set of the Wicca Horror Show, the namesake diva paced peevishly about a bizarre trio. The two bot brains were doing most of the talking; something about the whole affair had Cambris in a dreamy state, with no more understanding of the technobabble that had Wicca.

Producer Ed lounged on the set's red divan next to Commander Moast. Both savored beers while keeping a wary eye on the proceedings. First Officer Kyra stood nearby with coffee, looking ready for action.

Ed took a swig for courage. "Look here, Moast--are you in charge of this shootin' match?"

"Nominally yes. But Orchidia has altered her priority to self preservation. I can't make her do anything she feels is a threat to her integrity. On the other hand, that trait has saved us more than once."

The devious mind of the gold cyborg Queenie sought to draw Cambris out of her aloof superiority over the artificials. Calculating outrageous statement for maximum impact. "I sense a sexual tension between us."

It worked. Cambris drew up in wide-eyed amazement. "I?--with a collection of wires and springs?" Fangs came out, though no target presented save for super hard metal.

Undeterred, Queenie made a proposal. "Access to the starship will allow me to reroute the injector coolant circuit for chronotronic interphasiality."

Only Orchidia could fathom a tongue twister like that. "Plausible, though unlikely to see us home. Projected rationale: you will take the ship to Pluto Station, hyperjump to a suitable star system, and rebuild your Bot empire."

Wicca interjected herself with a toast of her small chocolate gin bottle. "A gal can dream. You know, Vern?"

Three sets of eyes considered, then quickly dismissed her.

Cambris recovered her aplomb. "To sojourn among the stars. How I yearned for it on summer nights."

"The observation is relevant," Orchidia said. "My alternate hypothesis relies on your species' ability for transforming into mist."

"Species indeed!" Cambris' pinpoint pupils fastened on another unlikely target in the amorphous hologram. "My husband was village alderman centuries before you were constructed from junkyard scraps."

Not programmed for cattyness, Orchidia found the statement nonsensical. "Your data set is flawed."

Wicca spread arms in a pique. "Borrrrring!" She put a finger to Queenie's neck. "They need your help, but you aren't going near that ship. Tell Orchid what to do. Remember what I did to you once?"

"Barbaric. You briefly regressed me to my humanoid origin."

"You were a huntress, a regular Peter Pan with bow and arrow. Then the Bots came. They sure didn't bargain for a type A overachiever like you."

"Preparing interface," Queenie prudently decided. She reached out to touch the virtual fingers of Orchidia. A clear disk formed between them, on which schematics flashed with mind-bending speed.

Moast had arms crossed. "Your diva is unexpectedly resourceful."

"She's an enigma, all right. Still hasn't figured out the urinals in the men's room, but she can engineer the overthrow of an empire."

"Assimilation complete." Orchidia rotated to face Cambris. "You may contact the hull in an envirosuit, under escort of Commander Moast. He will conduct you to a junction of limited opening, where your mist form will deliver the required part."

Moast sat forward with elbows on knees and brow furrowed.

"Quite a situation," Kyra observed. "Orchidia must trust you, and you must trust the. . . .the one with the fangs, in a restricted space."

Posted by Nick Nuko at 4:45 PM
Email ThisBlogThis!Share to TwitterShare to FacebookShare to Pinterest