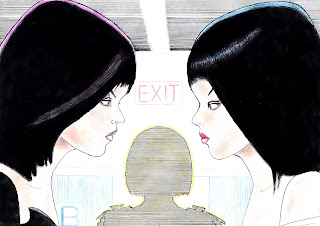 Previous The starship Orchidia accidentally reaches Earth in 2021. Seeking a way home, its commander identifies offworld technology involved with the Wicca Horror Show, and sets out for Hollywood.

Commander Moast and his first officer had barely departed before two titan intellects began sparring. Orchidia came under intense scrutiny by hijacked satellites. The gold cyborg responsible was of demonstrably higher technology, but lacked the immense power available to a starship. Orchidia subjected them to rolling overload blackouts, which kept resetting the alien program in a non-terminating loop. She devoted a full second to analyzing every show from the franchise, especially those involving the cyborg called Queenie.

In Hollywood, a gold cyborg with a black punk 'do--courtesy of Wicca--tread heavily downstairs into the second-floor studio.

It didn't sit well with the diva enthroned on a wing chair. "Queenie, who said you could pop out of your cubicle?"

The producer, Ed, set down his script copy. "Don't we have space weapons?"

"These are inordinately outclassed by the intruder."

"Negative. There is no Bot presence in this dimension."

Two people were shown in. One was a rugged type, the other a no-nonsense blonde. They looked a little out of place in L A, wearing casual hiking attire.

"Oh, we can't be having that." Wicca motioned for them to disarm. To their surprise, they came up with water pistols.

The woman squirted a few shots. "We hadn't thought you capable of transphasic conversion. Where is your emitter? I don't detect one."

"I'm not emitting anything," Wicca said. "Who says I am?"

The blonde indicated her partner. "This is Commander Moast. I'm First Officer Preston." She decided on Galactic Intro 6B. "Friends call me Kyra."

"What do you want me to call you?"

Kyra recovered smoothly until she glanced at her scanner. "Commander, this woman has no life signs. Are you reading this, Orchidia?"

"Confirmed," said the AI via comlink. "She is a fully preserved animated corpse. I detect an energizing force of high kinetic potential, type unknown."

"Just a little Outworld magic," Ed said. "She spent years finding and absorbing the five crystal skulls." He shook hands with Moast. "I'm Ed, and you can tell easy enough who the diva is. If you're like the gold one here, I reckon you're magic-challenged."

Moast eyed the cyborg. "We're from your future, here by accident. I don't suppose any of you have time traveled."

"Nothing to it." Wicca said. "I brought Queenie here from a thousand years ago because she was just too cool to kill."

"A costly mistake," Moast pointed out. "Are you aware your cities burn due to nanobot infection?"

Wicca turned on the Bot Queen. "I thought I had you neutered, missy!"

"If you mean spayed," Queenie said, "I was able to infect a cat before you corrupted my nanites with native force."

"What about you, Commander?" Ed shook hands again, forgetting he'd already done it. "Forget magic--I mean, what's it like in your time?"

"Thanks to your gold friend," Moast said, "Earth is one big video game playground where soldiers of fortune hone their skills. The uninfected live on Mars. And. . . .elsewhere."

Queenie faced him squarely. "You believe I don't know about your Pluto Station?"

"Regrettable," the AI said. "Her access to satellites briefly penetrated our peripheral files."

Wicca leaned forward to address the unit on Kyra's hip. "Relax, girlie. Queenie's nanites--at least the ones still inside her--only do my bidding."

They encountered another surprise when Eric Harker came in. The young college student was a long way from home. Ed and Wicca rushed to greet him, launching a flurry of questions.

"Hold on," Eric protested. "I got kidnapped aboard a spaceship. The AI asked a lot of questions about the show, the Outworld, the Brides. Then she sent me here on a remote-controlled skimmer,"

"Accessing Bride One," Orchidia said. From Kyra's hip unit she sent an energy beam that unscrewed the top of a coffee mug on Wicca's belt. A mist flowed out, taking the white-gowned form of Cambris.

The vampire stared daggers. "Who dares to summon me?"

Eric came forward. "It's okay, Miss Cambris. These are some space people who need help getting home."

Tearing her gaze from Moast's muscular neck, Cambris said, "I will see the one who disturbs my repose."

Orchidia's avatar materialized, a ghostly waif with a power crystal set in the forehead. She formed a very odd trio with Queenie and Cambris as they gathered for high-level talks.

Posted by Nick Nuko at 5:25 PM
Email ThisBlogThis!Share to TwitterShare to FacebookShare to Pinterest