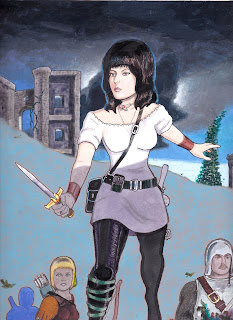 Acrylic, 11x17. Actually, Team Falco were not the first into the Outworld. They were a rescue mission for the trailblazers of Team Hathor, who weren't quite up to the magic requirement. The group's survivors, the wizardress Sisra and Captain Hathor took shelter in a Ghoul River village. Later, Sisra would reunite with the sorceress Orchid, who had been carried off by a winged gargoyle. The background was originally bright orange, but it overpowered the subject. The more subdued blue harmonizes with the ominous oncoming storm, while a streak of retreating sun outlines the subject. For an interesting peek at nationalities: the blonde is French, the girl in white is Etruscan, and Hathor is English.

Posted by Nick Nuko at 3:30 PM
Email ThisBlogThis!Share to TwitterShare to FacebookShare to Pinterest