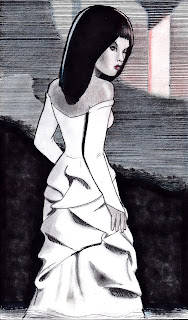 In a third floor condo, four people relaxed on a night off from the Wicca Horror Show. It had three bedrooms: one for producer Ed, one for the dwarf Hecabano, and one for the show's hostess Wicca. The vampire Cambris shared her room by day, sheltering beneath the bed.

Wicca grooved to her latest discovery, the eighties band Altered Images. The last strains of "Change of Heart" had just faded when Cambris jumped up and shredded her newspaper asunder.

"Pagh! Where may I find the perpetrator of this?"

Wicca looked up. "What's with you, girlfriend?"

"You don't like the local paper?" Ed prompted, pen poised.

Cambris got that mystical look, reached as if to find words.

Wayward souls reach for them from pools of purple cold.

Canst care or remember their lies?

None but those who believe, slave to them still.

Cambris bared fangs at said mistress, whatever it represented.

Ed copied furiously, getting it all down. "Perfect! She'll do it on Saturday's show. We'll call it 'Newspapers: a poem by Cambris'."

"Shall I remind you, Master Ed, she cannot be filmed?" Hecabano wolfed a handful of jelly beans, grimaced. "Ug. I would get a coffee bean." 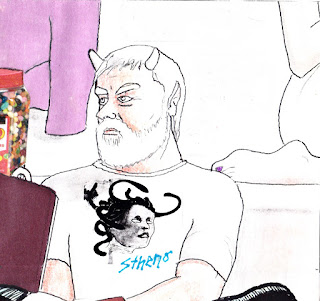 Wicca laughed. "Watch out for the brown speckled ones!"

"No sweat," Ed said. "Wics--remember that flesh paint we used to cover your gray skin?"

"Now I just use magic." She reared back in disgust when the dwarf offered candy, which, like all food offered the undead, was like pulling a cross on Dracula. "What--you're going to paint her?"

They used a sheet and a wig, leaving only Cambris' face to paint. Ed made a cell picture, which drew Wicca's laughter. The face had holes for eyes, showing the curtains behind the head.

"Appropriate for your Halloween season," Cambris decided. "Why did you not use a scry globe, which is able to capture my features?"

Ed grinned at the photo. "Like you said--wait'll the fans see this face reading a poem. We'll call it 'Revenge of the Invisible Woman'."

"Your words have no meaning," Cambris said.

Four people, only one of them human, watched a vintage horror film.

Posted by Nick Nuko at 6:48 PM
Email ThisBlogThis!Share to TwitterShare to FacebookShare to Pinterest