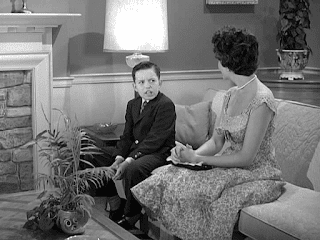 Already uncomfortable in suit and tie, Beaver sweated his mom's dinner invite to his fourth-grade teacher, Miss Landers. They made small talk while steaks were on the grill. Suddenly his older brother Wally asked her a calculus question. Was the showoff trying to embarrass her?

Ward Cleaver frowned. "Wally, the last thing our guest wants to do is talk shop."

Beaver let out the breath he'd been holding, noted the bewildered look on his mom's face. "Mom, you took calculus in school, didn't you?"

"Heavens no," said June Cleaver. "You don't need calculus to push a vacuum cleaner." Everyone except Beaver got a chuckle from that.

Ward excused himself to check on the grill, and wiseguy Wally did it again. "Do you like Dobie Gillis on TV?"

"I rarely have time for it, except for the anthologies by Ronald Reagan. I do think it develops kids' imaginations--shows like Lassie, Superman, and Twilight Zone."

His mom ended the interrogation by tapping Wally for kitchen duty. "Beaver, you keep Miss Landers entertained while Wally helps me set up the patio."

Beaver had to do something, so he turned on the radio. Naturally it was a commercial: You wouldn't expect such an offer to come in a detergent, but it does, in Duz. It was an opening, at least. Each box had  a piece of crystal ware buried inside: either a cup, saucer, or glass. "Miss Landers, do you use Duz? Mom uses the plates for us kids, 'cause we're always breakin' junk."

Thankfully the newest Elvis tune came on: She's Not You. "Do you like Elvis?"

"I like his music, but I think he's a little too sure of himself."

Beaver had to smile. Mortals like him had a chance against Elvis.

Just then, his dad called from the kitchen. "Beaver, escort Miss Landers to the patio."

Beaver hesitantly offered an arm, leading her out to the feast on the patio table. He briefly fretted about the corn on the cob, but Miss Landers simply shaved it with a knife. His mom discreetly copied the move.

Some time later, after talk of world affairs left Beaver out in the cold, his dad rose to begin clearing dishes. "Beaver, you stay with Miss Landers while Wally helps us with coffee and dessert."

When they'd gone, Miss Landers went over to the hose reel. "You know, Beaver, that tree needs watering. May I?"

Beaver swallowed. Did she know about the three clowns who'd been spying on them? "Uh. . . .sure, Miss Landers."

Owing to the soft ground, she left her heels behind, and dragged the  hose within range. A powerful jet began tracking up the trunk. Terrified protests heralded three figures hastily swinging down: Larry, Gilbert, and Whitey. Larry just couldn't keep a secret.

She aimed the pistol grip at them. "You boys had better scoot before the Cleavers find out. I'll go stall them. Tomorrow in class, we'll have a little chat about extra homework." She passed the hose to Beaver, went to retrieve her shoes, and disappeared inside.

"Gee, Beaver," Larry began, "we must have the neatest teacher in the world."

"I oughta soak you guys!" Beaver threatened. They scattered, not from the hose, but from Wally's approach.

"You're always sayin' how you hope she's still around when you grow up. There went any shot you might have had."

Posted by Nick Nuko at 8:27 AM
Email ThisBlogThis!Share to TwitterShare to FacebookShare to Pinterest