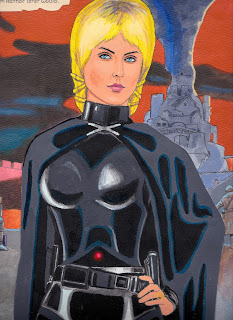 To be more exact, this llx17 is a closeup of their sorceress, Valkris. In the story, they seek a way down to a rumored sublevel nine, site of the Outworld portal which will later be found by Team Falco. At the time, the hair hadn't yet been turned white by overuse of magic. Some say there's a resemblance to the Blondie singer, so I later made some tweaks to make her more Nordic. This is acrylic on canvatex.

Posted by Nick Nuko at 12:48 PM
Email ThisBlogThis!Share to TwitterShare to FacebookShare to Pinterest