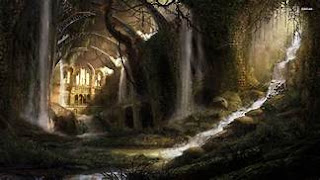 Previous: a Viking sorceress seeks her vampire counterpart to join a new team.

The Black Wraith could exist by day, making her a unique vampire. A hybrid succubus, actually. This preferred avenue of attack seemed one-sided, given her penchant for preying on only the greatest warriors. Such a pointless existence, Valkris knew, marked the wraith as deeply conflicted. The sorceress moved warily in the gloom, watching the shadows behind dusty, slanted beams of late sun.

"Show yourself." Only the surf answered, gently washing over a beached ship outside. Valkris took some high ground on a slab, boosting the challenge with a taunt. "You spy on women at their daily tasks. Perhaps you are curious about the mortal experience."

The wraith came forth from the dark, a raven haired enchantress in layered shroud. "Has Lord Falco told you he was able to resist me on the dream plane? Did you know I am a sorceress as well?"

It could be an opening. "If Falco intrigues you, join his team." Valkris wasn't surprised to hear Norse; the wraith could no doubt tap into any tongue. For just an instant, she caught a look of dread on the pale features.

Anger swallowed it up as the wraith raised an arm. "How novel to test myself against my own sex." A red miasma spiraled down, began spreading like a blood mist.

Not one to be defensive, Valkris summoned the Fire of Odin. It swept through the creeping death to spear fingers into her foe. 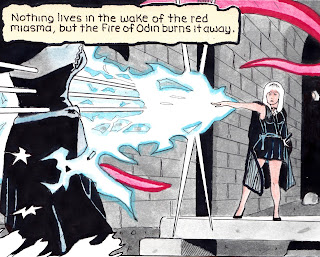 The wraith erupted into a storm of bats. Valkris surrounded herself with a cyclone until the spell faded, but her opponent had already cast another: myriad images of herself. Which was real? Valkris brought up the Shield of Loki, turning constantly to watch through the transparent runes. Almost too late she realized the true threat was above.

The wraith fell upon the hastily raised shield, hands crackling with spidery tendrils. These snaked around the edge, seeking flesh to feed upon. Valkris couldn't dispel it in favor of a different spell, but she could definitely move it. Dropping to a knee, she sent the shield and its sinister rider smashing into a far wall. From the other side of the gaping hole, the wraith arose in a cloud of dust. From a raised arm, she sent a green torrent into the vaulted overhead.

Valkris recognized the spell of decrepence, ran for the exit, nearly got there before tons of rock came down on her shield.

Sayed's small group watched anxiously as the ground shook, and segments of the castle wall blew out. All but Odkeitl: it was a small thing on the wheel of destiny, already decided. When Valkris emerged, minus slippers, Sayed couldn't contain himself. "Here she is, Lord Prince! Come and use your powers of persuasion!" 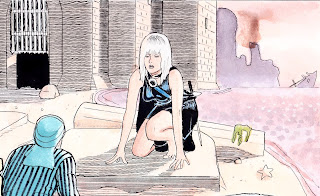 But the prince began pointing out various "imperfections" detected by his practiced eye, to Sayed's utter dismay. Was the man insane? She was incomparable. An unconcerned Valkris began gathering hair from her neck to rinse away sand.

"But my lord--I won't get one fifth of your price from the Egyptians!" Sayed could only watch as the prince and his Nubian guards marched away. He waited impatiently for Odkeitl to finish his brief of the sorceress. "It is done?"

"Done but not settled," the big Northman said. "The wraith plays a game with Falco."

Sayed's spirits lifted when Valkris spoke again. "What is it?"

"She wants to know what Nordic women are going for these days."

"Why? Does she know any I can purchase?"

"I would not ask. She's a fierce patriot."

"But. . . .I find myself in need of transport, Odkeitl. The prince will have my head for shattering his fond illusion about the Northern Flower."

"You may sail with us. If the sea is rough, we'll sacrifice you to the sea goddess." Odkeitl strode away, but Valkris was bound to hear Sayed's opinion of the disaster: 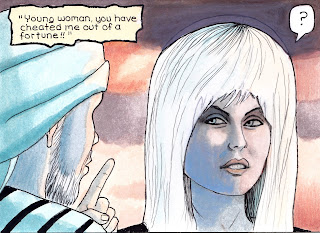 Posted by Nick Nuko at 6:42 PM
Email ThisBlogThis!Share to TwitterShare to FacebookShare to Pinterest