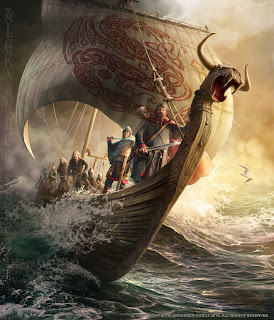 "By my graying beard," Sayed muttered, "there is her tent, flying the runes of Ragnarok." He struggled to restrain his pace across hot sand full of shells and bracken, just another trader in striped robe and turban. His four thuggish hirelings drew stares from the victorious crusaders sitting around their cooking fires. Still, Sayed needed the insurance, because Prince Khalim was offering a kingly sum for the fabled Nordblom, the Northern Flower. She'd be a rare addition to his harem. Powerful sorceress or no, she must surely prefer palace life to pounding the sea with barbarian raiders.

Abruptly he was alone under crackling date palms.

His men fled the dragon prow rounding the promontory. Had the crusaders asked the raiders' help in rousting the Saracens from their ruined fort?--or were they here to pick up their wayward sorceress? Alarmed, Sayed hurried closer.

The Viking leader, called Odkeitl, strode toward the crusader captain. Sayed eavesdropped on the universal Greek. How could his men help? Half jokingly, the captain pointed to the fort. In short order, the Northmen lofted ladders and grappling hooks, and screaming defenders were hurled from the parapets.

"Such waste," Sayed lamented. "They would fetch good coin on the slave market."

But Odkeitl was looking at the tent, whose flap opened to discharge the Nordblom herself. She wore a scandalous black shift, to which she buckled sword and cape. Odkeitl tossed her a wineskin. After a long pull, she spat a stream in exuberant excess. Sayed didn't understand their clipped Icelandic, save that her voice was low and cool. Suddenly she set out for the fortress.

Panicked, Sayed got in her path, hoping she spoke Greek. "My dear, war is for men. My client will set you in the lap of luxury. He--" There came a sting beneath his chin. Her rapier was pointed straight up, ready to thrust right through his skull, a calm promise behind eyes of ice blue.

"Blarendr kyrpingr." She made as if to bite his nose, obliging him to stumble aside.

Sayed made quick introduction to Odkeitl. "Are you mad, letting her join the fray alone?"

"It is no mortal she faces," said Odkeitl's baritone, "but she who is called the Black Wraith."

"Double madness! How. . . .how did you know this is the lair of the night roamer?"

"Our seeress foretold it. The wraith is wanted for the portal quest at Castle Locklor. Valkris is already pledged to the team."

"And what terrible risk does Valkris face here?"

"The wraith must respect those she would go questing with. Our seeress has foreseen such an outcome. The wraith will ponder this encounter, leading her to accept a later offer. One that will not go well for some Carpathian monks."

As the Northman would say no more, Sayed sat down to glumly await Valkris' return, or lack thereof. He sprang up when Prince Khalim arrived with a retinue of armed Nubians.

"This," Khalim said, "is how you procure my prize--by watching her march off to war?"

"War?" Sayed groaned. "If you only knew, Lord Prince. Odkeitl!"

"Blarendr refers to your blue stripes. As for the other, I had not known Valkris had such a word in her vocabulary." 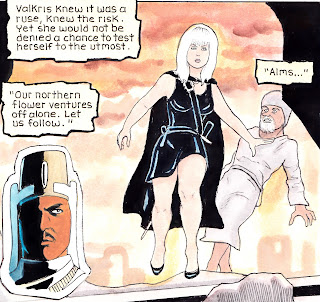 Posted by Nick Nuko at 7:12 PM
Email ThisBlogThis!Share to TwitterShare to FacebookShare to Pinterest