Real-life observations are a source of material for those times a touch of mirth is called for. With satire or comedy, it's just a matter of plug and play. For other genres, these brief detours can serve as ongoing subplots. Think Seinfeld: Kramer lucks into money; George is insecure and dishonest; Jerry has quirks and phobias. Might the writers have drawn on their own observations?

This example is a straight recount of some backyard bird follies, waiting for use somewhere in a story. A large ceramic plate served as a ground-level bird bath. A grackle--those large black bullies of the bird world--had commandeered it all to himself. Enter a starling, sternus vulgaris in the lexicon. These are scrappy, hard-eating little jokers better called munchibus scrappio horribilis.

The starling hopped into the water. Instantly the grackle lunged to that side and drove him out. The starling ran around to the opposite side and jumped back in, obliging the grackle to chase him out again. You can see where it's going. After a frustrating game of whack-a-mole, the grackle flew away in a huff. I can sense his thoughts: This place has become skid row. Maybe he's right. The plate was quickly full of happily splashing starlings. 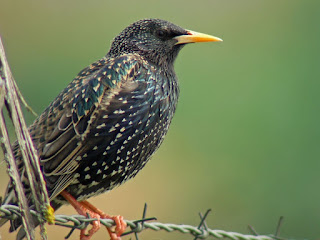 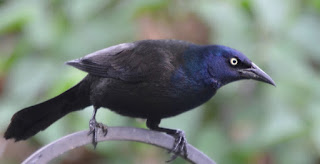 Posted by Nick Nuko at 8:26 AM
Email ThisBlogThis!Share to TwitterShare to FacebookShare to Pinterest