"Nocturne" was coined by the American Impressionist James Whistler to describe a scene at night. One of his best known is "Nocturne in Black and Gold--the Falling Rocket", which depicts fireworks at night. The form had been in use for centuries by that time. It didn't require a black sky by any means; Whistler himself painted a series ranging from late afternoon to late evening. The main requirement was gloom or mist--no direct sun.

My entry is a hybrid nocturne-abstract. It's 10x14 acrylic, showing the last orange rays of the sun, while buildings at the top catch the first rays of the moon. Is such a thing possible? Maybe no more than the crazy tilt of the structures, as if each is drawn toward its light source.

The scene was inspired by a magazine photo of a city on fire. The upper corner had a row of buildings catching firelight, which here becomes the last rays of the setting sun. I call it "The Sun And The Moon In Opposition." 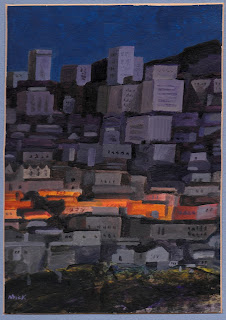 Posted by Nick Nuko at 9:43 AM
Email ThisBlogThis!Share to TwitterShare to FacebookShare to Pinterest