Incident at the Dragon's Tongue 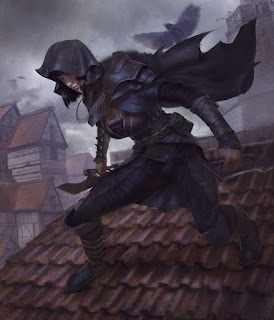 Khot, City of Thieves, in the Canal District

The Dragon's Tongue tavern sprawled drunkenly at the apex of an ancient conical tower. Chain bridges radiated from the landward side, linked with broad wooden plazas abuzz with commerce. Voices and gull calls augmented the rhythmic bang of a pile driver down in the boat yards.

A trio of thieves, the male burdened with a large sack, stepped onto the central plaza to take stock. Outwardly the tower looked serene against cold marbled skies on this winter morn. A milling crowd signaled trouble; they kept parting to allow casualties passage down the stairs.

The aproned tavern owner stumbled toward them. "Jili, you gotta do somethin'! Get in there and stop that big farm woman tearin' up the place!" He eyed the sack with mercenary interest. "I got a right to know what she wants with you." A sudden gust had him clutching the chain, whereas the sure-footed thieves never wavered.

"Last moment change of plans," Jili said. "I was supposed to deliver this at Lunari, but Eolcan agents found out. I set up a meeting at the Lair, but they said they'd find me instead."

Skuff wore his usual droopy-eyed sneer beneath his top knot. "It ain't safe to know that. Even we don't know. Ya'd think Jili had her dirty laundry in there."

"We'll handle it." Karla gave him a back slap, causing him to flinch before the mistress of blades. Onlookers made way for them, anticipating a new element of calamity.

The trio climbed steep wood steps, where a few rowdies opened the doors with a mocking flourish. A dingy passage led down to a garish red velvet vestibule. Its curtain was pulled aside on a scene of comical destruction; comical because of the overhead balconies, whose denizens enjoyed the show, once they realized the brawler had no interest in them.

"Way, way out," Karla mused as she navigated busted chairs and overturned tables. Patrons overhead shouted down taunts about their chances against the fighting whirlwind behind the bar.

Said whirlwind, wearing a simple dress and head wrap, watched them with arms folded. Most of the bottles behind her were shattered, infusing the air with the smell of ale and beer.

Jili righted a table and chairs, and Skuff dropped the sack there. He slapped the boards. "What's somebody gotta do for a little service?" He took the middle seat, watched the amazon swing legs over the counter, whereupon she took a seat opposite them.

"Only a Red Claw," Jili said, "would pull a stunt like this, and there's only one who'd be interested. It's been awhile, Caladra."

The Red Claw leader pulled off the wrap, showing the tinted white hair of her tree-dwelling culture. 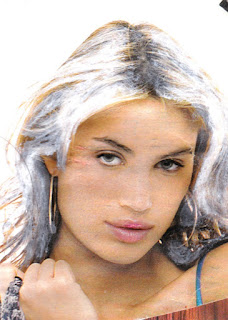 She looked inside the sack with pained reverence. "I never thought to see Eiridne's armor again, since that day you poisoned her, and she passed command to me."

Skuff began thunking his dagger ever closer to her hand.

"I was only a child," Jili countered. "What would you have done when commandos swooped in to kidnap you?"

"Our mission was to kill you," Caladra reminded, "because you're prophesied to destroy the empire. Now I'm an unwitting part of the conspiracy that brought you here. You're supposed to be serving the empire, not the king of thieves."

Skuff's blade thunked perilously close to her hand. With a swift backhand, she snapped off the blade. "Hey, nobody breaks my pig sticker without payin' a price--" He didn't reckon on the amazon's long legs, which upended his chair and spilled him out. He rolled backwards to riotous laughter. Then he returned to his place as if nothing had happened.

"What about that thing about having the armor?" Karla asked. It was normally a death sentence once the amazons caught up to you.

"I trust," Caladra said, "it was not at any time displayed for ghoulish amusement." The wrong thing said here would start another round of destruction.

"No one has seen it." Jili waited.

Caladra rose and shouldered the sack. A few observers fled back upstairs. "This will be delivered in state at our base in Daumastia. Thence it will occupy the most honored place in the Hall of Heroes."

The group made their way outside to the spidery network of bridges and broad plazas. Crowds took shelter under awnings when a wyvern wheeled in from over the river. Its pilot set down precariously on the sea wall.

"I know," Jili said. "Eiridne's daughter must never find out about me. I don't relish a fight with a tier six sorceress."

After the wyvern took wing with its passenger, one of the cafe owners trotted gingerly across a bridge, a covered tray in his arms. "Jili, this for you! Thanks for getting rid of that lunatic amazon. All my customers were out here watching the fun, and I'm going broke!"

Skuff parted a fold with the stump of his dagger. "What this sheep dump?"

"Sold." Karla took the bundle. Having fled a privileged life, she was familiar with the finer things. "Let's find a hidey hole and dig in. Since we got nothing for the armor, the day isn't a total loss."

Posted by Nick Nuko at 10:43 AM
Email ThisBlogThis!Share to TwitterShare to FacebookShare to Pinterest