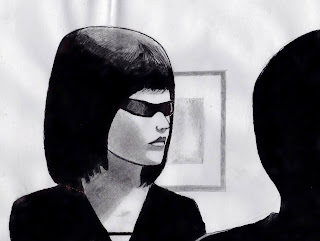 Late afternoon sun baked freshly cut grass, its aroma reaching Ed through the third floor patio. A droning airplane yielded the stage to a chattering cicada chorus. Those harbingers of dying summer depressed him, so the trio of co-workers who barged in could be forgiven for disturbing his reverie.

The dwarf Hecabano plopped down beside the coffee table with his usual repast of large hoagie and super Big Gulp. To Ed's snide look, he said, "I have long since hung up my cape and dropped out of the competition, but I still wield a mean ax." His white-bearded face regarded Wicca, curled up on the sofa as a tune played on the Cerwyn Vegas. "It is not your usual Goth death metal. In fact, it is somewhat pleasing."

Ed reached for the disk's liner notes. "Nada One. Judging by the lyrics, it's about a frolicking orbital spaceship, but the title sounds suspiciously like 'Not A One'. Let's consult a computer brain. What say you, Queenie?"

The gold cyborg stood  motionless by the drapes, an anachronism in a slanting ray of dust motes. "The subject is sufficiently esoteric to warrant multiple interpretations. I will abstain."

"Okay then," Ed said, "we'll appeal to the experts. According to the notes here, the band called it a trippy song. Probably while tripping."

Hecabano nodded. "There you have it--it is a frolicking spaceship." Wicca had taken up some impromptu lyrics: You are the moon in my eyes, you are the stars in my sky. "With pardons, Maven of Malarkey, but those words do not occur in the tune."

"Then they should, because they rhyme!" She scowled at the auto section of the Sunday paper. "I don't like the Cylon-face front ends of these new cars."

"It's called bad," Ed put in. "Like the demon-eye headlights they think is so intimidating at night."

"I call it cartoonish."

Hecabano finished the bucket-sized drink. "What matters it now? You cannot take your Ferrari to Outworld when Mistress Queenie turns the lights out for good."

"Yeah," Ed added. "This is your doing, Wics. You had to bring her here as a sidekick. As if the Illuminati weren't bad enough before she took over the show. I hope we can make it to Outworld before Earth becomes the latest prize in the Bot Star Empire."

If Queenie could grin, a huge one would be pasted there.

"Oh well!" Wicca threw up hands. "If these people are so easily subverted, then Kratos take them. But I am taking my Ferrari to Outworld. I'll charge people money to sit in it."

Posted by Nick Nuko at 2:28 PM
Email ThisBlogThis!Share to TwitterShare to FacebookShare to Pinterest