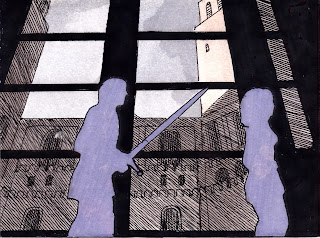 Previous: the assassin Jili has teleport codes to an enemy floating city.

The Archonage, gateway to the dimensional hub

Because Team Dan received an emergency summons, they decided to launch their dark realms mission ahead of time, obviating the need to go home and gear up. The broad, recessed teleport dish glowed with standby power, awaiting arrival of a team in dire straits. Overseers in an overhead booth stood ready to switch on the alternate receiver code. All outbound teams would use it if the primary code didn't work, alerting them that some invader was trying to come through.

Bonnie pulled Zena away from autograph seekers at the barrier fence. "Come on, lady. That team could come through any minute." She frowned at an ad, having picked up enough Lunari to read it. Want to converse with Team Dan in their native tongue? Learn English! Slick operators knew enough to pass as instructors, but it was mostly Earth slang, especially Zena's crazy one-liners. The group's favorite reporter, a plump girl called Marnee, asked them for a pose. 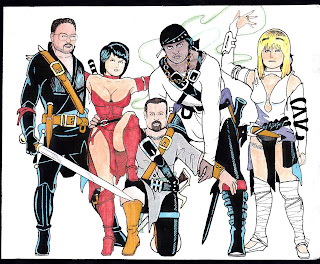 "I feel old," Dan lamented. "They're calling this the comeback tour."
After scry balls captured the pose for the evening newscast, Bonnie motioned for Marnee to approach. "Take an image of this." Her pad presented a picture. "Zena after rolling out of bed." 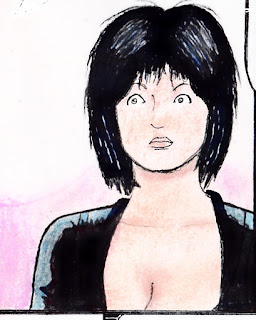 "Bonnie!" Zena clapped a hand over her eyes. "I can't look."
Suddenly the portal blazed with four incoming figures, survivors of a group of five. One man limped out with an arrow in his leg, his clothes smoldering. The team's wizard helped him aside as base healers rushed in.
Dan trotted over to the leader, whose arm was bandaged. "Gracious, Turim--where did this happen?"
"Library," the man said sheepishly. "I thought we could handle it." Located on the Archon plane, the Library repository of arcane knowledge made incantations into reality.
"Been there," Dan said. "A book was thrown at me that sent me to Earth. I crashed onto a car hood and set off every alarm in the parking lot."
"What's a car hood?" Turim asked.
A tone sounded, signaling an impending arrival. The Tekniker devices would not process a partial teleport. Whoever or whatever got caught in the field was passed along after the primary transport.
"Watch out!" Turim bellowed. "It's one of them!"
All but Team Dan rushed into a field shelter next to the dish. In a second flare of blue light, something came through.
"Devil dog," Bonnie said. "Seen it, done it." She took a bite of a fritter, having missed lunch.
Zena jumped for attention. "Hey, lover, come to auntie!" She went to one knee and extended hands, conjuring the frosty animus of a spell. The slathering, red-eyed beast charged, preparing to spout flame. It slowed under a withering barrage of super-cooled air, its front part going icy white.
Bonnie finished off the fritter, wiping the hand on her skirt, snatching the Mace of Stheno with the other. But the gorgon wasn't needed here. The barbed ball rocketed forth to snap off the frozen head.  Crowd noise quieted to the level of awed disgust. Reporters got it all on scry balls.
"Cripes!" Zena rose unsteadily. "Like that burned through a third of my reserve."
Bonnie picked two pills from her wizard kit. These replaced metals used up in magic, where they were stored in specialized areas of spell casters' brains. They didn't work as fast as potions, but were a lot cheaper.
Leaning against a column with Ed, Pete had arms crossed. "Are we ready to get on the road?"
"We are," Jili said. She was disguised as an old witch so enemies wouldn't know she was away from Khot.
"Boogity." Pete was first into the teleport dish.
Posted by Nick Nuko at 3:25 PM
Email ThisBlogThis!Share to TwitterShare to FacebookShare to Pinterest