Good afternoon fellow writers, editors, teachers and those aspiring into the

literary field.    My topic today is the best dialogue you ever
read, heard.  Please copy & paste them. It can be from anywhere, such as plays
and the big screen.   I thought of this topic because I think dialogue is so
expressive and the way itis said is also important.
It is not on the list, but Princess Bride's  "My name is Inigo Montoya, you killed
my father, prepare to die."

When two people gather in a room to talk things through like adults, what happens in mostly pretty
standard; if everything goes right, both individuals shake hands and go back to the world with a
smile on their faces and one reason less to worry.
However, in the movie world, when you see a dialogue-heavy scene coming, you know it’s about to
go down.
Unlike the real world, two individuals having a conversation can’t just be a friendly encounter
(unless you’re watching an indie, low budget or Richard Linklater film); tension has to be present,
with plenty of drama and rage. In short, shenanigans are likely to ensue and at the very least,
something important will be revealed that may change the course of the plot.
If you decide to continue reading this amazing list, you’ll find the 20 best one-on-one
verbal confrontations of recorded film history.
20. My Dinner with Andre

This movie consists of a single scene of dialogue, stretched for over two hours, in which the
protagonist reunites with an old friend named Andre, who has been involved in an interesting
series of activities in a search for real meaning in his life.
Wally calmly listens as his friend enthusiastically describes what he has been doing all this
time: being buried alive, making a weird play with no audience in a forest, adopting a
Buddhist monk for a few weeks, joining a group of people who were trying to achieve a
kind of enlightened extra-human state. Andre seems to be into new age culture, and he
and Wally are very dissimilar.
Watching them talk for almost two hours nonstop is quite interesting. The protagonist
disagrees with Andre’s extremism about how the modern world is pointless, but he does
appreciate the comforts that technology offers, whereas Andre prefers a more animalistic
and natural state of being and savagely critiques the vices and problems of our contemporary
civilization.
Their philosophical dissertations show some of the blatant issues Western society has to
face, such as alienation, routine, self-deception, lack of empathy. It’s an analysis you shouldn’t
miss. Best lines: Andre: “Our minds are just focused on these goals and plans, which in
themselves are not reality.” Wally: “Goals and plans are not… they’re fantasy. They’re part of a dream life.”
19. Manhattan

All Woody Allen films are dialogue driven. His scripts are influenced by a
number of literaryauthors, and most of his texts could be easily adapted
into a play. He also borrows often from the Hollywood golden era and
classic foreign masterpieces, such as “Casablanca”, “8½”,
“Citizen Kane” and “The Seventh Seal”.
“Manhattan” is a mixture of many of his inspirations, including New York,
which may be considered his biggest one. Allen plays Isaac, a chatty
New Yorker who’s dating a 17-year-old named Tracy.
He doesn’t seem to be taking the relationship seriously, but Tracy has
fallen in love with him.
Throughout the whole movie, Isaac treats Tracy like a child and is
condescending toward herin an attempt to undermine their mutual
affection. He prefers thepseudo-intellectual Mary,but it’s clear
that he would rather be with Tracy if not for her age.
At the end, Isaac’s attempts to seduce Mary get hampered by his
best friend. Isaac runs toward Tracy’s building, realizing that he had
always loved her, while the wonderful soundtrack transports us into
ancient Hollywood history. Gershwin’s famous “Rhapsody in Blue” carries the
whole movie until the end.
She’s getting ready to leave for London on a scholarship, and when he realizes
that it’s too late to convince her, Tracy comforts him by saying that when she
comes back in six months, she would still love him. Isaac is not so sure about that,
but is convinced when Tracy says the famous line: “You have to have a little
faith in people.” This scene nicely ties up the film in a nice bow. Shot in glorious
black and white and withamazing performances from both actors, it’s one of the
greatest dialogues in film history.
Best lines: Tracy: “You have to have a little faith in people.”
18. The Third Man 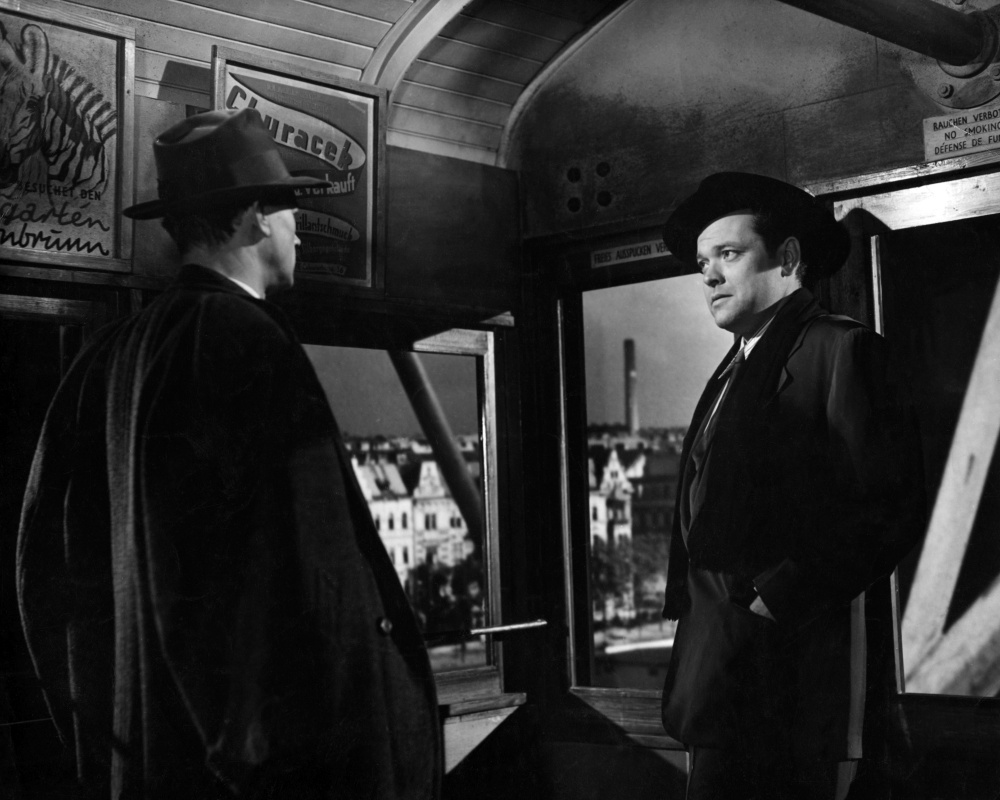 Considered one of the best classic thrillers of all time, this movie’s smart plot was decades
ahead of its time, inspiring future generations of filmmakers with its flawless black-and-white
aesthetic and memorable scenes; namely the famous dialogue on the Ferris wheel.
Holly Martins has arrived to post-World War II Vienna, following an invitation from his old
friend Harry Lime. Just after his arrival, Holly is informed that Harry was run over by a truck
and died instantly. He assists with the funeral and everyone seems to think that Harry was
a criminal. Holly then starts a difficult investigation process to prove the innocence of his
best buddy.
After asking around, the protagonist is convinced that his friend isn’t what he used to be.
Everything points at Harry being a cruel racketeer who faked his death, so Holly tells one of
Harry’s associates that he’ll be around the Ferris wheel waiting for him to clear things up.
Harry, played by no less than Orson Welles, joins Holly at the meeting spot as though everything
were normal. Holly starts talking about all the evidence he has found against him; meanwhile, the
Ferris wheel has started spinning, and we see the landscape moving behind Harry. He doesn’t
seem to care about any of this and threatens Holly’s life if he were to rat him out. The dialogue
itself turns very poetic, as Welles’s character is marvelously written, and he carries the
conversation like a master of manipulation, while his friend is perplexed at his change of
personality.
This is a key moment for the film, in which Welles solidifies his awesome performance and the
mystery is cleared.
Best lines: Harry Lime: “Don’t be so gloomy. After all it’s not that awful. Like the fella says, in
Italy for 30 years under the Borgias they had warfare, terror, murder, and bloodshed, but they
produced Michelangelo, Leonardo da Vinci, and the Renaissance. In Switzerland they had brotherly
love – they had 500 years of democracy and peace, and what did that produce? The cuckoo clock.
So long, Holly.”
17. Goodfellas 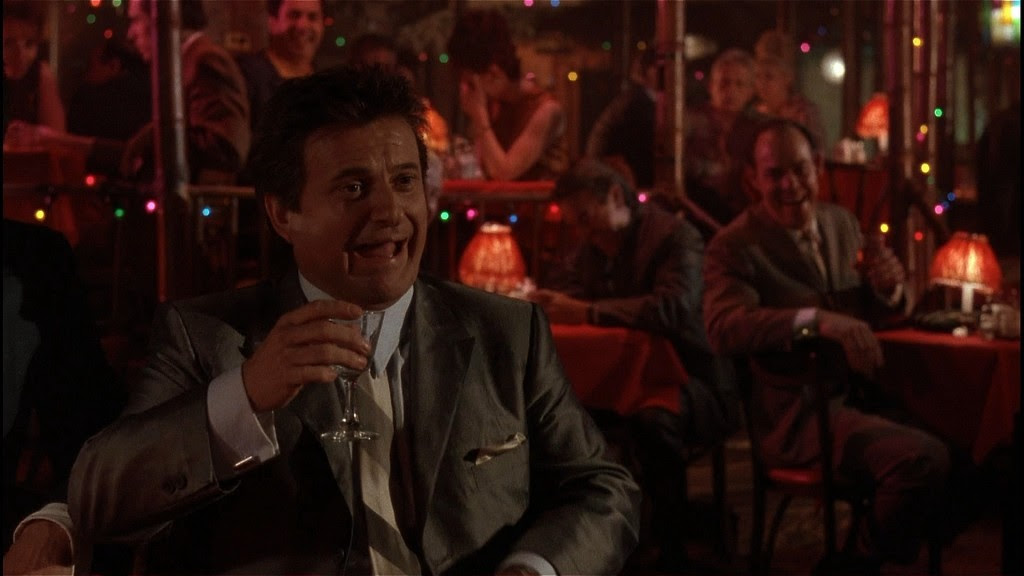 In an attempt of reprising the role of “himself”, Joe Pesci plays a psycho mobster named
Tommy, who’s as crazy as he’s funny, although Pesci’s character is in denial of those aspects
of his personality.
Martin Scorsese structures this dialogue scene wonderfully, using two camera setups that
allow us to see each character’s reactions.
Tommy is telling a story to a group of other mobsters in a restaurant, about how he refused to be
interrogated by cops when they approached him as he was resting in a park. Everyone is
laughing due to the actor’s hilarious way of telling the tale and Henry Hill (played by Ray Liotta)
instinctively says to Tommy that he’s funny, who replies, “funny how?” Henry doesn’t know how to
answer and starts mumbling, so Tommy questions him again with a bit of anger in his voice,
as silence takes over the table.
Soon enough, Henry finds out that Tommy is only messing with him and everybody starts laughing
again. However, we also see how much of a lunatic Tommy is, which makes us wonder if Henry
is safe by his side.
This scene is based on a real experience Joe Pesci had when working on a restaurant. He told
a mobster that he was funny and things went downhill from there, as the guy didn’t take the
compliment too fondly. The director didn’t add this bit to the filming schedule, only he and Joe
knew about it, so the other actors improvised around Pesci’s great performance, and their
reactions are real and priceless.
Scorsese portrays the relationship between these two in a single masterful dialogue that,
on top of being amusing, establishes the movie’s whole rhythm, which is dynamic and unexpected.
Best lines: Tommy DeVito: “No, no, I don’t know, you said it. How do I know? You said I’m funny.
How the fuck am I funny, what the fuck is so funny about me? Tell me, tell me what’s funny!”
Henry Hill: [long pause] “Get the fuck out of here, Tommy!” T: [everyone laughs] “Ya motherfucker!
I almost had him, I almost had him. Ya stuttering prick ya. Frankie, was he shaking? I wonder
about you sometimes, Henry. You may fold under questioning.”
16. Hunger

Steve McQueen cast young Magneto and Davos Seaworth for his first feature film. I was surprised
when I didn’t encounter any swordfights or metal bending/murdering in the whole film’s runtime,
although I did came across a sweet dialogue scene.
Michael Fassbender plays Bobby Sands, an Irish republican who leads a hunger strike while
imprisoned. He has a conversation with Father Dominic about his life, religion and motives, a
relaxed chat while smoking and displaying a great amount of chemistry. The camera is static
as both men interrogate one another.
Both actors do a great job, as filming a single take from the same angle and with an extreme amount
of lines to remember couldn’t have been an easy task. Though we only see their shapes due to the
dim lighting for most of the scene, the performers are able to express every emotion and keep us
interested for almost 30 minutes and with minimal cuts. Best lines: Father Dominic Moran:
“I want to know whether your intent is just purely to commit suicide here.”
Bobby Sands: “You want me to argue about the morality of what I’m about to do and whether
it’s really suicide or not? For one, you’re calling it suicide. I call it murder. And that’s just another
wee difference between us two. We’re both Catholic men, both Republicans. But while you were
poaching salmon in beautiful Kilrea, we were being burnt out of our house in Rathcoole. Similar
in many ways, Dom, but life and experiences focused our beliefs differently. You understand me?”
15. Casablanca

Holding the unbeaten record of the world for “most times the movie’s title is mentioned in its
runtime”, “Casablanca” is really the classic of classics. People don’t usually think that is the best
movie ever made, but within its historical context, “Casablanca” set the tone for decades of cinema
to come.
American Rick Blaine (Humphrey Bogart) and his squeeze Ilsa Lund (Ingrid Bergman) were forced to
flee Paris just when their relationship was consolidating, because Hitler just couldn’t go down
without committing every crime imaginable, he also had to cockblock Humphrey Bogart. However,
Ilsa suddenly decides to ditch him with a letter, which is the equivalent of sending your loved one
a Snapchat of you raising your middle finger as a breakup tactic.
They see each other again, after a long time, in Rick’s popular nightclub. He possesses some special
visas that Ilsa and her revolutionary husband need in order to escape from the Third Reich
persecution and flee to the United States. He’s reluctant to give up those documents, because of the
great harm Ilsa caused him; Bogart’s character often states that, after what happened to him,
he only cares about himself.
However, in the final scene, Rick makes a huge sacrifice for the greater good. He was planning to
give Ilsa’s husband the visa but stay with his former girlfriend in Casablanca, because she claimed
she still loved him. At the moment of truth, he gives them both the visas and stays alone, with one
of the most memorable lines in the history of film.
http://www.tasteofcinema.com/2016/the-20-best-dialogue-scenes-
in-cinema-history/
Posted by Laura J at 12:31 PM
Email ThisBlogThis!Share to TwitterShare to FacebookShare to Pinterest