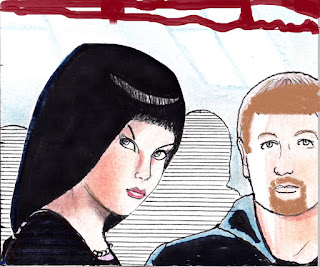 Moonlight capered on the Southern Sea, riding the crest on a breeze that stirred Ed's lofty perch. The wooden walkway hung beneath a bridge spanning the harbor district. It provided passage for those wishing to avoid the vendors who'd taken up residence above. Not a bad place to think, either, after the raucous reunion with the team. Their villa still blazed with light atop one of the twin hills framing the seaport.

Ed nearly dropped his Yeungling when a figure appeared nearby.

"Beware," said Cambris. "The Brides are abroad this night."

Anyone else would be headed for the pavement as a more merciful end. Ed's neck was reasonably safe owing to the number of times Cambris had visited the L A studio of the horror show. Speaking of which, he had to wonder what she was doing up here.

"Nevermore shall I imbibe on your world. The last, I spewed in supreme disgust."

"Sure you did: about half of  'em have a little DNA-corrupting additive. Can't blame you."

Cambris joined him at the rail, likewise dangling legs over the side. Not one to hang out, she must want something. "A penny for your thoughts goes the idle adage."

"Huh? Oh. . . .I just wondered whether I'm even going back." She offered a coin, which he favored with a sardonic grin.

"I have offered payment," she prompted. When he started to take it, she pulled it back. "Does a writer not understand a jest? You have time yet before the days of a glabrous pensioner."

Gloating over his mortality? "Yeah, well, I'm sure it sucks to be one of you guys." He grinned widely.

"Your humor eludes me, Edward."

"I sense there's something on your mind." Noisy revelers stomped by overhead, unaware of their peril.

"Indeed. As you are a writer, I seek to understand subtext, for the betterment of my journal."

"No joke? Well, dialog is a character's goal. Subtext is how he feels about that goal." It seemed a good time to test her on the subject. "I sorta despair of getting Team Dan to go on anymore missions. They're too comfortable over in that cushy villa."

Cambris did pick up on his hidden meaning. "Again you will broach the subject of Team Ed, and his need for spellcasters. Be mindful that we are not ideal, as we are available only by night. However, I am able to be abroad in a dim edifice."

"And I can be a dude in a dim edifice." Cheesy grin.

"Your humor continues to elude me, Edward." Glowing grackle eyes. "Do you desire to return to the party?"

Ed looked out at the forest of ship masts bobbing at anchor. "It's my turn for subtext? I get the feeling you have some alternate transportation in mind."

Cambris stood up. "Prepare. I will not climb and walk when I can fly." She transformed into a  monstrous flying thing, slightly bent because of the bridge overhead. One taloned foot kicked away the railing. Seizing Ed in powerful arms, she leapt into the night.

For a veteran of dragon flights and wild rides on Wicca's flying stick, it wasn't too bad. Ed's eyes watered at the passage of cool wind as they swooped toward the villa hill. "Good idea. You can practice subtext on Bonnie and Zena. They're masters of not saying what they mean."

No comment resulted, as the flying thing had no need for speech.

Posted by Nick Nuko at 10:45 AM
Email ThisBlogThis!Share to TwitterShare to FacebookShare to Pinterest