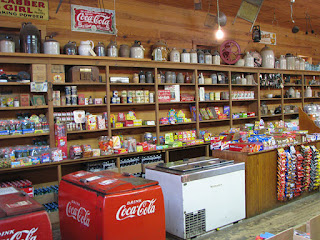 In a town forgotten by time

A rented white SUV bearing four occupants pulled into a muddy clearing. With the engine shut off, water drops from lofty pines were loud on the roof. The object of their quest, an ancient country store, moldered on a low rise across a rickety foot bridge. A hand-lettered sign read "Stobrod Durnham Store". It promised childhood treats no longer available in big cities--exactly what Ed wanted to save from extinction. The Outworld store in that other dimension was just the place, if he could persuade the owner to abandon the rapidly-sinking U.S.S. Earth.

Ed squinted through the trickling windshield. "Let's hope nobody's there but the owner. We might spook the locals."

"Not you, Master Ed." The dwarf Hecabano wore a logger's cap over his satyr horns. His black muscle shirt contrasted with Ed's sport coat.

Two women, sort of, occupied the back seat. Wicca disdained her vampish stage dress in favor of a white peasant blouse and jeans. This was no place to sink Gucci heels in hog slop. The Bot queen wore jeans, sweatshirt, and gloves to conceal her goldtone plating. Beneath the black punk 'do bestowed by Wicca was a passably human mask. It served to avoid drawing attention on the highway.

Wicca hopped onto grassy knolls to avoid the mud. "Ha! Why don't you ask Queenie what a bad girl she's been."

"You refer," the Bot said, "to the recent military coup I engineered to hasten your demise."

Hecabano looked back under drizzly skies. "Ah. That explains why they cower behind razor wire and thirty thousand handpicked troops."

"Come on, knock it off." Ed kept a leery eye on muddy water rushing  beneath the bridge, which had no hand rails. "Stick together so he can keep a tab on us."

An old-fashioned bell tinkled their entry. Ed savored the weathered floor boards, homespun displays, the smell of produce and pine cleaner. The joint was a bonanza of edible memories.

"I don't believe it." Ed reached into an old red cooler and extracted a  bottle. "Kickapoo Joy Juice, the precursor of Mountain Dew. Taken from the Li'l Abner comic strip. They've even got Moon Pie and squirrel nut zippers."

Wicca frowned at bags of pink, white and brown coconut drops. The undead had no need of food, but in her case, a taste for expensive booze.

It was Queenie who drew first notice from Stobrod. He rocked sedately behind the counter, sizing them up with a wizened eye. A frayed ball cap sat well back on his thinning pate. "They hell izzis?"

Queenie's heavy tread creaked the floor boards as she went in Ed's face, having no concept of personal space. "Explanation required: how can you translate this dialect when it eludes my vastly superior processors?"

Ed puffed cheeks in thought. "I grew up with it."

"Say," Ed ventured. "I notice you're an inspection station. Could we get our vehicle done?"

"After awhile," Ed supplied for Queenie. "How long is that?"

"About half an hour. Okay then."

Wicca sashayed from between displays. "Hey, Hiram, do you folks get the Wicca Horror Show in this burg?"

"I ain't going to," Ed furnished as that last remark. "No, we're buying, not selling. But I don't want to clean you out."

"You kin buy the whole shootin' match, all ah cares."

"Excellent!" Hecabano trundled off on another expedition, aiming for some pineapple bear claws from Mexico.

Wicca tossed raven locks. "Ever been to Wexelt? It's in the Outworld, where the witches are."

"All day, Bay Ray. It got me into the academy. Now I'm a tier seven mage."

Ed stepped between them. "Yeah, well. . . that's what we wanted to ask about." Behind his back, he waved Wicca off. "We're looking to help people relocate. I'm sure you can see where it's all headed. To use a French flair--garBAZH."

Queenie came near. "I have established an algorithm which can translate this dialect with 89 percent certainty. You will continue speaking, human."

"We get it," Ed hastily put in. At that moment, Hecabano returned with more treasure.

"Master Ed, what are hoarhound drops?"

Wicca laughed. "Whore hound? What a thing to call candy! Let me see." She recoiled from the brown molasses hard candy thrust at her. "I do not want to know why they call it that."

The proprietor was steadily ringing up the haul. "Yona th'ow in the inspection? Up ta twunny-fie so fur."

A boy of about ten came in, wearing overalls. "I slapped on the sticker, Gramps."

"Most curious," Hecabano said. "Is there not a minimum age for certified state inspectors?"

Stobrod looked down at him. "Ah sells inspection stickers. Y'all jess boughten one."

After a short talk with Wicca, Ed asked whether Stobrod wanted to appear on the show, at the going rate of ninety dollars for a cameo.

Wicca clapped. "Of course you can, Stan! Outworld dimension, you've got another one!"

Posted by Nick Nuko at 11:18 AM
Email ThisBlogThis!Share to TwitterShare to FacebookShare to Pinterest