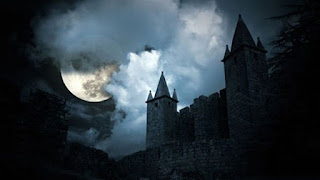 Gothic is defined as "medievalism with horror and romantic elements". The first Gothic novel was The Castle of Otranto, written in 1794 by Horace Walpole. It was Walpole himself who coined the term, adding "A Gothic Tale" to the second edition of the wildly popular book. Prior to this point in the eighteenth century, most ghost stories were written by women, featuring damsels who cleverly get themselves out of supernatural peril. Things took a more sinister turn in the nineteenth century, when the genre reached its zenith under authors like Sheridan Le Fanu, R L Stevenson, and M R James.

Science was coming of age, and modern man liked to pit himself against the powers of primordial darkness (which seldom ended well for him). Authors flaunted their education, using Latin without a translation, in the assumption their readers didn't need one. The writer's voice was as much part of the entertainment as the story--a chatty style where 100 words did the work of 10--since there were no time constraints like those we face today. Flowery prose lent itself to the required over-the-top drama.

Hollywood adaptations of Frankenstein, Dracula, and The Mummy aided the transition to America. The speaking style lives on in characters like Jack Sparrow, since American English is uninspired by comparison. If you plan to use this method, you'll need to be widely read in it. A good place to start is Victorian Ghost Stories, edited by Cox and Gilbert. At the very least, your character will stand out by his speech alone.

Posted by Nick Nuko at 11:13 AM
Email ThisBlogThis!Share to TwitterShare to FacebookShare to Pinterest