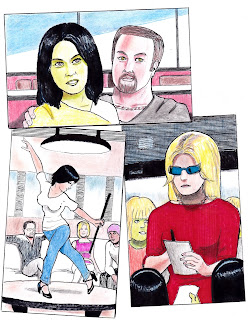 Having made another supply run from Earth, Ed overslept due to "portal lag". The aroma of bacon drew him down the corridor to the large common room. Only Zena was currently at home. Dressed in white island blouse and jeans--quite an eclectic blend of cultures--she was still uncrating specialty items for the magic shop she and Bonnie had a financial stake in.

Ed took in the familiar statue in a corner it shared with a towering fern. It depicted an armed pirate shielding himself from something too horrible to imagine; that being the namesake spirit of the Mace of Medusa. "Are you guys ever gonna sell this thing? One guy offered a year's rent on the villa."

Zena set down a jar of German whiskey cornichons--crunchy gherkins laced with vanilla and honey. "Bonnie's proud of that battle on Rotbone Island, you know. She mentioned maybe making another one on a mission to Smuggler's Cove. But heck, like the shop is doing gangbuster business."

"What are we doing for lunch?" Ed started for the kitchen.

"Beans and franks in your honor--a little touch of home."

"Cool," Ed said with an effort at his old aplomb. Had he come to this end?--the visitor who barely knew lifelong friends anymore, friends who had blended in with Outworld culture. "I'm gonna watch, so I can make it back in L A." His hand suffered its first slap from the cook, Oki, when he tried to snatch some bacon.

"Watch what I do," said the green-skinned islander. "You learn how, yes?"

Oki sliced a disk from a large onion. This she rotated while making inward cuts to produce a pile of onion cubes. As they sizzled on an oven powered by miracite crystals, she splashed on rapeseed oil and added black pepper--both products of Earth. Next came the pork and beans, followed by several squirts of barbecue sauce while the franks browned.

"What about the bacon?" Ed asked, making another abortive snatch.

"That is for last, so it stays crunchy. You know?" Zena was definitely rubbing off on the maid.

"Okay then, let's get to it." Ed trailed Zena into the enclosed balcony. A gathering storm stirred whitecaps on the sea, and wind rattled the glass panes. Somehow the mood was prophetic.

"So Ed, where's your transportation?" Zena asked. She began to plate up.

"Wicca? No doubt stretched out on the bar in some dive."

Zena laughed. "Hecabano went to the gaming district to try his luck. Cambris flew to Rotbone Island to reunite with the other Dracula brides. Everybody has his own little world."

But Zena had always been more of a homebody, one of several things they had in common that led to Dan pairing them on missions. Ed experienced a momentary panic: if Cambris regaled her sisters about the easy pickings on Earth, might she invite them all there? Ed wasn't sure he could control four of them.

Oki sampled her fare with a frown; Lunari cuisine didn't feature much beef or barbecue. "Mister Ed, you do not have so much the jokes anymore."

"I guess we're getting swallowed up in our own pursuits," Ed said.

"Ha!" Zena set down her spoon. "Remember that book on tap dancing I asked for last time? I've been studying it--and that's like all-American!"

"Right," Ed added. "And I see Zena is corrupting you with Earth slang."

"That's nothing," Zena insisted after a sip of coffee--another Earth import. "I'm learning some Lunari. But that doesn't hold a candle to all the fly-by-night English instructors here. They teach the fans just enough to impress Bonnie and me at autograph events. They make the funniest mistakes!"

Ed squeezed eyes shut. What was next?--subways and hot dog stands? He carried his empty plate to the kitchen.

Oki cornered him there. ""Mister Ed--will you bring more of the cloudberry preserves from Sweden? And brandy cherries? And the rum custard, and malt scotch cake--"

Ed took her shoulders. "Oki, I rest my case. Let's have some of that ligonberry torte while we wait on the others to get home. I can't wait to see Zena tap dance."

Posted by Nick Nuko at 12:37 PM
Email ThisBlogThis!Share to TwitterShare to FacebookShare to Pinterest