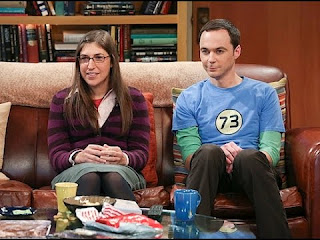 "Good evening, all. Sheldon Cooper here with my assistant Amy. This week we'll examine words of consequence. Here's some you'll never hear: 'My parachute didn't open.' " He grinned. "Unless you're a zombie, and then you just get up and walk away."

"Next," Sheldon went on, "here's words your dentist will  never hear: 'Skip the tired jokes, Hoss, and just fix the tooth, okay?' " Despite Amy's warning look, he couldn't resist dumbing it down. "Oops--looks like the dentist forgot the novocaine!" He bowed. "Thank you, you're too kind. How about words you don't want to hear during cataract surgery: 'Oh crap. . . .' "

"Well, let's turn to history. We all know the trite quote 'Dr Livingston, I presume'. Actually, he mistook the aide from Caracas, who said, 'Thou presumest most wrongly, seenyore'. Now that's quotable!"

Amy grimaced. "And we think you're making that up, seenyore." She held up a photo of a gender reveal, the new craze of announcing coming births. A balloon pop spewed a cloud of blue powder. "What if it's one of each? Now you have pink and blue powder mixing to make purple. What the heck is that?"

"Really, Amy, you're too much the biologist. Let's consider unlikely words from Captain Picard: 'Mr Worf, the word is weapon, not hweapon'. "

"That's a weird segue. But as long as we're on Star Wars--" Amy puzzled over Sheldon's horrified look. "--the meticulous Dr Spock will never say 'The odds are about three to one, but don't quote me'." She laughed. "Unless he wants to get kicked off the Death Star."

Sheldon's jaw quivered with the effort of not blowing up. "We'll try to get past a trade of job titles, ships served on, and wholesale franchise swap. Let's move on to those cartoons where you have to supply the words." He displayed a four-panel drawing. A hen caught its reflection in a floor mirror and engaged the other in a furious pecking battle. The mirror tipped forward. WOP! The last panel had the dazed bird wandering off. "Let's have some callers. What's the bird thinking?"

A youth came on speakers. "No fair pulling that kung fu stuff!"

"She must be one of those biker babes!"

"No, no," Sheldon insisted. "We're missing the theme here, clearly about the pecking order. I'd go with 'Okay, lady, take it'."

"Her place at the top of the pecking order, of course."

Numerous callers chimed in before Sheldon was compelled to return to outer space. "In what universe is Mr Spock a member of the Star Empire?"

Amy shrugged. "There was that episode where he had a pointed beard, and threatened to blow up a planet if they didn't surrender their corbamite."

"That was the evil Spock from another dimension, and the word is trilithium!"

"What's the difference? It's all spaceships and lasers." Amy recognized a pending head explosion when she saw one. "We'll take a break, and get away from this scifi jazz."

Posted by Nick Nuko at 3:17 PM
Email ThisBlogThis!Share to TwitterShare to FacebookShare to Pinterest