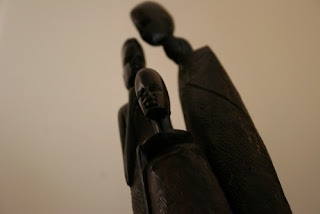 A remote village appeared out of the morning mist. Two passengers in the canoe sweltered and slapped at no-see-ums, frowned at razoring bug song and a staccato echo of wood drums. Bob Symonds, CEO of Astro-Glasco Pharmaceuticals, received a water bottle from  Olaf Oleson, manager of clinical trials for the new meningitis vaccine. Painted faces on shore were not friendly. Women with infants on their backs ceased pounding grain, and men left off mending nets. A chant arose.

"What are they saying?" Symonds demanded. "Sounds like 'pig farmers'."

"Big Pharma," Oleson said. He wiped his glasses, squinted at sparkles in the muddy waters. "It's not a compliment thanks to the new chief."

Symonds climbed out when the canoe ground ashore, eyeing a young man in red and black who came down from a stilt hut. The photo dossier identified him as Selko. Numerous villagers had died during the trials, but Selko's particular side effect was a new genius intellect. Symonds meant to know how it happened, which required blood samples, and so he'd acquiesced to the man's stipulation that he come in person.

Oleson scanned the village as they walked up the sandy hill, trying not to look as anxious as he felt. "He learned English in a matter of weeks, with the help of a laptop he bargained from the field team. And he looks plenty angry."

"I'll handle him. Our backer has very deep pockets."

Without ceremony, Selko led them up the ladder. The hut sported shields and spears, merely ornamental, since the Batonga were a peaceful folk. It was a prime consideration for the experiments. The chief squatted on a reed mat and invited them to sit.

"Mwapona," Oleson greeted. How are you.

As the visitors' eyes adjusted, they noticed the old man in a floppy hat. He held a large gourd pipe having a long stem.

"The calabash fruit," said the chief. "One of your pipe designs takes its name from it, notably in the collection of Sherlock Holmes."

The man was widely read, and only since a few weeks ago. Such an intellect could be Symonds', once he had those blood samples. A few hundred more test subjects should iron out the bugs.

"This is my father," Selko went on. "After the injection, he no longer speaks. My brother is dead; some of the women have stopped their courses, meaning they cannot bear children. Some of the young ones are now dullards. Is this not what your masters desire?--to cull the population by nine-tenths?"

This would take more than blankets and beads, Symonds realized. He let the familiar party line roll off his tongue. "These are unfortunate coincidences. You should know that your government is well paid by. . . .certain wealthy parties to ensure your cooperation."

Selko seemed unbothered by money or coercion. "Why are you not required to do a placebo study, which would isolate side effects to your drug?"

Again the practiced lie: "That would deprive thousands of people a needed treatment."

"The pill makers could use the same excuse, but they are not allowed to."

Symonds spread hands affably, hiding his impatience. "You must understand the need for herd immunity."

"Herd? Human beings are not cattle. Perhaps it is your masters who need culling by nine-tenths."

The aide jumped in. "We're prepared to offer millions for your help. Think of it: no more fears of meningitis."

"How many thousands more Africans must die before this happens?--victims of experiments you would not perform on your own people?"

"Your government can force the matter," Symonds warned.

"Do you know what you've done?" Symonds thundered. "It will be years before that injection is safe! You've killed us!" Both visitors suddenly realized how this vindicated Selko's words.

"Have no fear," Selko assured them. "The needles delivered only saline. Now leave me, as there is much work to be done." He held back one of the tribesmen. "See they are far from here before there is an unfortunate coincidence." The man nodded knowingly.

Selko pulled the laptop from under his bed. He already had home addresses for every Bigfarma CEO on the planet. Now he did a new search: soldiers of fortune for hire. One had to be discreet, as he couldn't very well advertise for assassins.
Posted by Nick Nuko at 7:45 PM
Email ThisBlogThis!Share to TwitterShare to FacebookShare to Pinterest