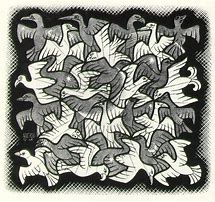 Our artist highlights today focuses on one of the most amazing illusion artists known at M.C. Escher.  I recall creating an art lesson plan for elementary school.  All the students enjoyed it and how similarities to Salvador Dali might have inspired each other's works.   Many factors could have influenced his work, such as time period.

He was by far one of the most exceptional graphic artists of his time.  Born in the Netherlands in 1898 and in a family of four siblings.

Personally I have been to the Netherlands and a truly beautiful country and I recall the people very proud. A lot of bicycles, too.    He dabbled at the School of Architecture and decorative Arts.  It was graphic arts that he pursued.   I assume he was not supported by his father in his decision but a teacher who directed him in his pursuits of his career.

After he married, he resided in Italy that encouraged his realistic works of art of lithographs.  It seemed he was drawn to metamorphosis of animals, design of architecture and contrasts.  During ghis lifetime Escher made 448 lithographs, woodcuts and wood engravings and more than 2000 drawings and sketches.   He was also left handed.  In addition he worked as a graphic artist illustrating and designing books, carets, stamps, and murals.    A genius of his time he truly is still remembered today by his works that play with our perspective.  I would have to gather he connected with his subconsciousness very well with a photographic mind.  The way he saw his world drew us in to his very well indeed.

Posted by Laura J at 7:59 AM
Email ThisBlogThis!Share to TwitterShare to FacebookShare to Pinterest
Labels: Laura J