The Seer of Trajan's Market 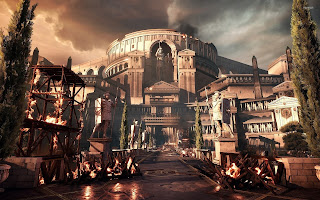 Built into the Quirinal Hill on terraced slopes, Trajan's Market dazzled the eye with its vaulted skylights. Tiered levels did flourishing business under its hazy ambiance. Dust was always a problem, tracked by so many feet, but the design admitted fresh air while keeping rain out.

The ground floor featured hundreds of shops fronted by counters where orders were placed. Patrons ate or gossiped on stone benches. The more affluent availed themselves of gated enclaves like the one that drew Severus Longides to a much-anticipated appointment. One needed a wealthy patron if he intended to escape a doomed world.

At a sumptuous table sat Flaminius Narvo. The plump money lender looked imperial with his yellow sash and curled ringlets. He sampled a platter of boiled tree fungus in fish sauce, noticed Severus, and waved him over. He pushed across a jug. "Try the caroenum."

Wine cooked down to half volume was somewhat rich for a nervous stomach, but Severus decided to be obliging. By its feathery embellishment, he recognized boiled ostrich in sweet sauce. Romans were sauce-crazy to the point of buying it in amphorae.

"Eat up," Flaminius urged. "I've been to the vomitorium, so there's room for the main course when it arrives. The sweet sauce is defritum." That explained the heavy cloying taste of fig sauce boiled down to one-third volume.

Severus appreciated the splashing fountain that muted conversation at other tables. "You've heard of Artemus of Brittania?"

"Of course." Flaminius dug into rose fricasse in pastry, with its custard of sheep brains. "The madman claiming to be from the future. Flying machines, talking picture boxes. Preposterous!"

"The immediate future is just as grim as he paints his own. The empire will fall."

The host's forehead crinkled. "That is dangerous talk for a dockyard clerk."

"Hear me out, Flaminius. He escaped the disaster at Pompeii, brought back in time by some magician's trick. His predictions are uncanny. He foretold how Fundanus would be governor of Illyricum twenty years before it happened." Severus paused to watch a pair of ladies saunter along the second tier, servants in tow who carried their purchases. "He cannot go back to his own time, but knows of an alternate world."

Flaminius tossed his head. "I've heard the tales coming out of Burnum. It's concocted to scare the locals away from the fortress." The main course appeared: ham pastry stuffed with fig sauce, garnished with lobster and asparagus.

Nut-stuffed dates fried in honey tempted Severus into taking one unbidden. "Perhaps you haven't heard how it all began. A soldier of the Thirteenth Legion, on maneuvers at Illyricum, went to relieve himself in some brush. He discovered an apparently bottomless hole and figured it was just another gold mine. Instead, it was a vast cavern system. Numerous parties failed to return before the cause was ascertained--unearthly horrors, some of which wielded magic."

"Yes, yes, and that's why they built a fort atop the thing. So why haven't we seen any of these denizens brought back for the colosseum games? Magic is little use against lions!"

"I don't know," Severus admitted. "It's a great conspiracy. I was hoping your influence could raise a delegation to the base commander. One thing I'd like to know is why he's bringing pure representative cultures there: pedigreed Romans, Northmen, Britons, Gauls, Teutons."

Flaminius raised an indolent brow. "Perhaps he's stocking his world with all the right connections. Come now, Severus, you aren't much of a salesman."

"If you ask me, I'd say they're operating a secret school for magicians, then putting together teams to fight their way down to a rumored gateway." It would take more than crazy theories, Severus realized, sensing defeat. He excused himself, already considering the next name on a rapidly-shrinking list--he was starting to get a reputation as a crackpot.

A man beckoned from an alcove. Severus put aside his fear of robbery, since a hairdresser conferred nearby with an aristocratic lady.

"You seek patrons," the man said.

"I am called Artemus." He furtively displayed a rectangular device having rows of mysterious symbols and a smaller rectangle of glass. "One day, even the poorest will have one of these. With it, you can speak with anyone in the world."

"I need people I can trust. There is a secret entrance to Burnum. Avallach, Lord of the Dead, created a secret passage that avoids the dangerous areas. Are you prepared to spend two weeks underground?"

"Others of my kind are there, having found a gateway in modern Brittania. I intend nothing less than returning to my future, where a certain newly-arrived magician awaits a punch in the face for doing this to me."

Severus hefted the surprisingly heavy device. "Could I get one of these?"

Posted by Nick Nuko at 11:10 AM
Email ThisBlogThis!Share to TwitterShare to FacebookShare to Pinterest