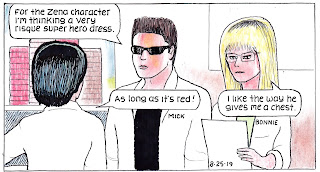 The day shift filtered in on a cloud of feminine laughter. That was the usual reaction to my daily comic strip posted in the break room. Maybe us guys were outnumbered 21 to 4, but humor was the universal bridge. Despite the popularity of the Lab Trek series, featuring the whole lab staff as Enterprise crew, I was in a rush to start a very different format.

Lab manager Dan wasn't here yet, so I felt out the two ladies of our proposed Team Dan idea. They had no interest in fantasy, of course, but roles and costumes were the first order of business. Sorceress: the hard-hitting offensive arm of the team. Wizard: in charge of defense and healing. Since Bonnie was already in chemistry, and wore glasses, she fit the role of bookish wizard. Zena was head of microbiology, a rather conservative type who was a perfect foil for the in-your-face spell caster. It was the same reason I made her the trigger-happy first officer of Enterprise for Captain Dan.

The costume idea made the most of her, well, attributes, which she afterwards found hilarious; you'd never catch her on the street in a getup like that. Summing up each member's take:

Zena: Cool!
Bonnie: My dress has a split all the way to the waist. . . .
Pete: If this catches on, can I sue?
Dan: My wife wants to know when we all get rich.
Ed: Being a super hero is the greatest!

Nearly 400 comic strips, half a dozen T shirts, and dozens of stories later, Team Dan is still around. It gave rise to the inevitable spinoffs.

Dan: Who is this Wicca character?
Mick: Just a comedy villain. I wonder what would happen is she suddenly found the power to act on her crazy opinions. . . .
Dan: Heh! Watch out, world.
Posted by Nick Nuko at 10:59 AM
Email ThisBlogThis!Share to TwitterShare to FacebookShare to Pinterest