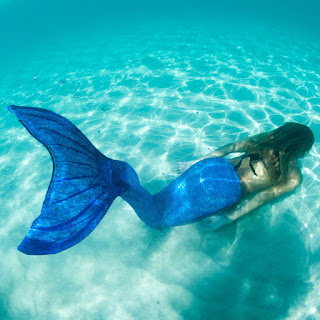 Compared to the Six Forks Palladium, the Southern Sports Emporium was tinsel and mirrors. So went the consensus of three performers invited as special advisors. There was no mermaid palace behind the scenes, a private dressing area complete with food machines, fridge and microwave. Its pool was a modest affair with only a curtain that raised and lowered over the rear stage. A concealed door admitted the guests.

Lori, the resident star, cavorted in a suit of red scales, long brown hair flowing in her wake. Shoppers grew ever more vocal in anticipation of having four  of them to gawk at. The visitors were said to put on a top-rate act.

Struggling into their suits behind the curtain, the trio lacked top-rate enthusiasm: blonde Binia in white, redhead Ellie in green, and the brunette Sirtis in blue. When they signaled readiness, the curtain raised to lively applause. Lori also joined in the welcome, standing in the neck-deep water.

Binia motioned her over. The suit had a sort of lobster paddle in lieu of elegant flukes. "Lori, we don't have feet. When you push off, use the crowns instead of the heels."

The store manager, Mr Stark, addressed the crowd with a mike. "Direct from our neighbor to the north, we're delighted to host Binia, Ellie, and Sirtis!" It was their clue to jump in.

The water's coldness was in contrast to the heated concourse at Six Forks. The pool itself, rather than being recessed, was a slapdash affair of plexiglass, and the concrete floor remained unpainted.

Ellie took a turn tossing the beach ball, having partnered with Lori. "I definitely like the glass. We only use it as a crowd barrier. But anyway, is this the only toy you have?"

"Well, so far." Lori batted the ball to Binia. "What do you guys have?"

"A submarine, Frisbees, sea horses, flying fish. . . ." Ellie had the impression Lori wasn't all that interested.

Sirtis as usual went her own way, zooming along the bottom, drumming on the glass to the thrill of kids--and a manically chasing, yapping terrier.

During the break, all four sat with fins dangling in the water. Stark kept up a tempo of special "today only" deals. Fortunately it was too noisy for anyone to engage them in converse. Back home, the trio upheld the mermaid mystique by remaining silent in public. Lori suggested that wasn't very friendly to paying customers.

That brought up Binia's next tip. "You need to do shows, like water dance or a coin toss, and that takes at least two of you. We have these pails and shovels for scooping coins, and a treasure chest to dump them in. What else. . . .no gum or hard candy. When you surface and take a breath, you might suck it into a lung."

"Try some theme music," Ellie added. "We like Enya and Constance Demby. And it's a good idea to pin your hair. It looks good billowing under water, but when you surface, you look like a drowned sheep dog."

Binia took a hard look at the home attraction. "Aren't you writing this down?"

"I don't know; Mr Stark isn't gonna lay out that much money."

"You mean--" Ellie traded looks with the others. "You're the only one here for the duration?"

Lori sloshed water with her fin. "Oh sure, I guess so. He'll probably hire somebody else by month's end, if the suit fits. Keep it fresh, he likes to say. I'm just an inventory checker who got 'volunteered' for this."

"So, ladies." Sirtis contemplated her raised and dripping flukes. "We thought we were helping a sister. And all the time, this guy just wants free advertising. We've been punked!"

Stark emerged behind them with a grandiose bow. "Folks, don't forget our sale on outboard motors. But be careful out there, and watch out for the mermaids!"

"Oh yes." Sirtis balanced on her hands, did a powerful sweep of the tail, aimed at Stark's back.

Stark made an ungainly splash, floundered and thrashed, struggled to keep head above water. Thinking it staged, the crowd roared appreciation. Stark had no choice but to affect a strained grin as he struggled onto the stage. "Are you nuts? Now the suit will shrink. It's ruined!"

Sirtis made as if to bite his nose, forcing him to lean away. "Watch out for the mermaids."

Posted by Nick Nuko at 11:05 AM
Email ThisBlogThis!Share to TwitterShare to FacebookShare to Pinterest