Judgment of the Clueless 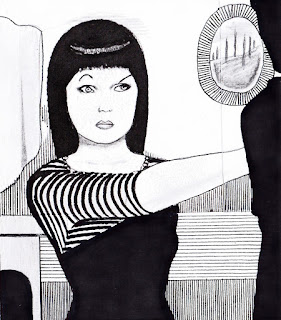 Gators U hosted its culture seminar at a convenient time for vampires: seven in the evening. Not that they believed in this escapee from a Lugosi film; Cambris had been discovered as a disembodied voice on the Wicca Horror Show, in keeping with the fact she could no more be filmed than reflect in a mirror. The college staff good-naturedly toed the line about no cell phones or cameras.

Professor Turkel let his glasses dangle on a sport coat with elbow patches as he took the podium. "We're pleased to have three members of a TV show. For those of you in journalism, writing or acting, their life experience should be insightful."

Seated behind the podium, Ed tried not to laugh. Neither Cambris nor Wicca were alive in the technical sense. Station management, also ignorant about that, had him in a real pickle.

"Let's introduce our guests," Turkel resumed. "Cambris you know by her stage name. With her are Ed and Wicca, producer and host respectively."

"Hostess," Wicca said with tired resolve. "I'm a hostess." Ed tried to pry her out of the seat. "Who, me? What do I say to these mask-wearing, TP-hoarding sheep?"

"Life experience," Ed insisted. "Try to keep it this side of the Twilight Zone."

With an eyeroll, Wicca sallied forth to more applause from the tiered spectators. "Umm. . . .why are soap bubbles green and purple?" It reminded Ed of the Munsters episode where Herman wowed the beatniks. "What else. . . .ladies! When you do floor exercise, put Fido out. He won't pass up an opportunity like that." Subdued tittering broke out. "If you're an older guy out jogging, and get passed by a girl pushing a carriage, hang up your shoes. And your cape!"

"Who should we send to Mars? Weirdos who clog the grocery line because they crave the clerk's sole attention." That actually drew cheers and claps. "And drivers who hang their arm out the window." She made a smiling hand gesture in conclusion.

An alarmed Ed sprang up to seize her wrist. "I keep telling you--it's a thumbs up!"

"And I say this one is longer, so it makes more of a friendly greeting!"

The crowd laughed. Ah--it was a comedy warmup for the main speaker. Cambris, though, was equally at a loss for what this bunch needed to hear, and required some coaxing.

Wicca pulled her up. "They think you're a playwright, girlfriend. Get out there!"

Pads and notebooks whispered out of satchels when Cambris came forth. "Shall you fain find joyance in the judgment? How so in a shadow time of changeling twaddle, polemics e'er relumed, and a script ripped unread?"

A girl whose mask sported bunnies raised a gloved hand. "It was effective to put 'ripped' after 'script', since that changes it from an adjective to a verb." The professor nodded approval, but it didn't sit well with a former village matron who brooked no sass from pre-medieval serfs.

Cambris turned pinpoint grackle eyes on Ed. "This mortal dares to intermeddle, pitting piffle jellified against the dissonance of eons."

Ed bowed his way forward, making a self-conscious wave to the crowd. "They're supposed to do that. It's a teaching seminar." He scurried back to his seat.

"I see the problem," Wicca said. "These people don't know when they're being insulted. I always thought the backpacks make them look like little parachuters."

The audience seemed to enjoy the byplay, so much gimmickry in their estimation.

"Whence your course," Cambris posited, " 'neath doomed skies? Mine own path wends 'tween worlds and words insentient. Naught to our gatherage lends empyreal tryst; none but solace of nocturne and moonmist."

"Hrrmmm." Ed squirmed, but the students were busy writing it down. What else would a "vampire" talk about?

A goateed youth in a logger's cap raised a hand. "Did you get your skills through an MFA?"

Again Ed had to ease on stage to translate for her. "Master of Fine Arts. It's just another degree you go way in debt for, and can't find a job."

It didn't improve Cambris' opinion of today's society. She swept a fluted arm to encompass it all. "Yon commonage is enrapt in a turpitude less loved in my day, and the more avidly they do evanesce."

Prophetic sentiment notwithstanding, the crowd applauded the display of wordsmithing. Professor Turkel, still clapping, replaced Cambris at the podium. "Marvelous. We can almost believe she's a creature of the night. Am I right? I picked up on some unusual word pairs. I think we'll call the style 'Cambrience'." Both laughter and clapping signaled the group's agreement.

The trio headed backstage, ostensibly having garnered a few fans for the horror show. Ed hoped he hadn't soured Cambris' worldview. "Cambris--I tend to talk out the side of my mouth. What's the rush getting back to the Outworld?"

"Pish! These people have a foul taste."

Like Wicca, who used a "soul drain" to recharge her magic--limited to the criminal element at Ed's request--Cambris stalked the same hunting ground.

"Oh that," Wicca said. "This is the most medicated place I've ever seen. You can't find anybody who isn't flying on something."

Posted by Nick Nuko at 8:36 PM
Email ThisBlogThis!Share to TwitterShare to FacebookShare to Pinterest