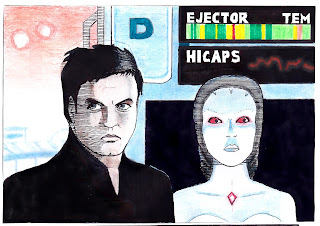 Filters came on line as soon as Orchidia sailed out of the Builder portal in the Sagittarius dwarf galaxy. The Pistol Nebula reflected brilliant light from its resident hypergiant, the Pistol star.

"No sign of the probe's destroyer," said First Officer Preston. "Scanning coordinates of Icarus star from its last transmission. They lead to a dead planetary body, probably a gas giant stripped of atmosphere by intense solar wind."


"Analysis." Moast swiveled toward the helm, manned by navigator Chet and helmsman Berl.

That brought a curse of appreciation from Trenn Harker, the Consortium rep bent on turning a profit. "This isn't a place for a vacation or starting a colony." His look soured when he addressed the AI. "What do you think about that, Computer?"

"So it's a little too warm," Harker surmised. "Nav puts us only a hundred light years from galactic center. We could be the first to go there, maybe verify that rumored supermassive black hole."

"This requires seventy-six hyper jumps. Fuel drain is not acceptable."

Harker started to object, but Berl responded to the sudden alarm tone. "We've got an inbound from that dead body, coming in at high warp."

The intruder was impossibly fast. When close enough, it fired a plasma beam that struck the ship's port wing. An explosive-reactive panel ejected, rapidly eaten up by the charge, which would have consumed the entire ship. Suddenly the ship made a short hyper jump. In its previous spot, a white shock wave blossomed. The intruder managed to avoid it, but immense tidal forces bent its course so sharply that it flew apart.

Harker swore again. "That was a black hole bomb. . . .left behind when we jumped."

"A perfect example," Moast said. "The AI reacts a lot faster than we do. Orchidia, damage report."

"Five point eight percent of the port wing is now unshielded. I am directing servobots to install replacement panels. The impact damaged ejector coolant pump six. Repairs are in progress."

Harker strode toward the main viewer. "We can make good use of that wreckage. It might be Builder technology."

"Negative. Its magnatronic core is still intact. It could be detonated once aboard ship."

"Agreed," Moast said, heading off Harker's retort as to just who was in command. "Set course for the dead planet."

It was Kyra Preston's turn for concern. "We could be attacked again--en masse."

"Doubtful." Moast had a captive audience. "Why didn't the attacker destroy the portal if it doesn't want anyone out here? If it isn't Builder, it certainly respects their property. I think the sting of what happened has them pondering and guessing."

"If that's true," Harker insisted, "then we'd better make a good impression. What would the Builders make of you? Are you just along for the ride?" He left the bridge, as planet-fall wouldn't be for several hours.

Kyra leaned an arm on Moast's chair. "He seems dead set on recommending replacement of the AI. You know--considering the zero option--I'm not sure I'm willing to sacrifice my career."

"It's not a good outcome," Moast said. "We'd have to destroy a gateway behind us to prevent pursuit. Then we'd need replacement weapons from the black market. And overhaul would be impossible."

"Yes. And I have to wonder what Orchidia will do, given her drive to survive."

In Harker's quarters, a whimsical waif silently appeared. The avatar drew near the sleeping man, stopping next to his duffel bag. A ghostly hand reached through the fabric. When it located the personal data pad, it went to work.


Posted by Nick Nuko at 2:42 PM
Email ThisBlogThis!Share to TwitterShare to FacebookShare to Pinterest