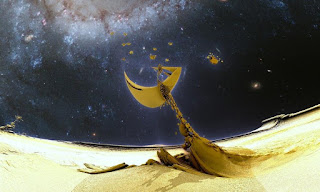 Moast attached a plate-size comm link to the towering alien structure, the only one on the former gas giant. Decoding its records was worth the risk of another probe attack. Still, he'd taken certain precautions for a quick getaway after the earlier fight.

Distant light from the Pistol star glinted on Harker's visor. "What do we have so far, Kyra? I'm getting a little antsy."


First Officer Preston's voice was tinny in their helms. "The inhabitants couldn't stop the solar wind from stripping off the atmosphere. They used the Builder gateway to access a chain of stepping stones to the Large Magellanic Cloud." This was a cluster of dwarf galaxies 179,000 light years from Earth.

"Why not elsewhere in our their own galaxy?" Harker inquired. "We've got no shortage of gas giants."

"I think," Moast decided, "they had actual contact with the Builders. Later generations wanted to find the Builder home world, and the Magellanic Clouds are the first step on the journey."

"How do you explain these attack drones?" Harker demanded.

"Probably just guardians of the old homestead, in case they ever wanted to come back and lay a wreath."

Suddenly, a stream of incandescent balls came down to hit the far horizon. White flares erupted into a shower of burning chunks hurled out into space. Orchidia's chain guns were targeting hatches identified as egress points for the probes.

"Better get back  now, Commander. Multiple contacts beneath the surface. Counting eleven in process of launch."

The last probe they'd tangled with had blasted a section of reactive armor. Eleven of them would be like inch worms on an elm tree, leaving nothing behind. Both men sprinted to the fork-tailed shuttle.

"Prepare for hyper jump," Moast ordered. "We won't waste time docking. Jump as soon as we're inside the ship's eventuality field. And power up the pulse gun."

Harker pulled off his helm once inside the shuttle. "You're using a sledge hammer on gnats? We don't have time for that."

"Diversionary tactic." Moast punched the craft to top speed. He came up beneath the broad wings, noted with approval how Kyra had the belly docking hatch closed.

As planned, they jumped behind the enemy force, to the pulse gun's maximum range. From the ship's nose lanced a twined blue beam that distorted nearby space and rocked the shuttle. The planetary impact area bloomed red, yellow, then white in a hellish storm of molten debris.

"The core is unexpectedly dense, Commander. Multiples converging. We're rotating to keep the exposed wing section from them."

Two disintegrator beams hit the ship, going right through the energy screens, but the protective armor jettisoned. The chain reaction burned itself out harmlessly. But if an exposed area was hit. . . .

"Jump now!" Moast shouted.  This one brought them close to the Builder portal and home. Far behind, a momentary wink signaled the planet core's explosion.

Harker rounder on him. "Dammit, Moast--there goes our last chance at hooking one of those probes!"

Since Moast had received a private message from the AI--something she'd found on Harker's pad--he didn't sweat the man's bluster. "Well, they shouldn't have scratched up my ship." He grinned. Harker grew suspicious enough not to continue the fight.

Back on the bridge again, Moast watched the yawning hatch as the Builder portal prepared to take them inside for the return to Pluto Station. "Harker, I recommend not trying to have the AI replaced."

"A little birdie tells me you retired from command of the battleship Suru prematurely. You were promised command of its new sister ship Orchidia. But then the Orchidia was scaled down to midsize. Your ego would never allow commanding a smaller ship. Its just sour grapes."

The AI materialized next to Kyra, a blank faced pixie with red eyes and blue skin.

"Well played," Harker conceded. It even had a touch of grudging admiration.
Posted by Nick Nuko at 2:42 PM
Email ThisBlogThis!Share to TwitterShare to FacebookShare to Pinterest