OUTWORLD, IN THE HARBOR DISTRICT

The Dockside shop bore the name of its red-haired owner, who was yet another lab worker from Earth, once having managed a blood bank. On this drizzly gray day, the shop was closed to unload fresh shipments. One of these was rare and dangerous black water from the dark realms. It tended to collect deep underground in pagan temple lavers.

Minding the counter were the two ladies of Team Dan--Bonnie and Zena--who had bought shares in the enterprise. Their contribution of specialty items from Earth did wonders for business. As for coffee, they tended to hoard that at their private villa.

Ed, another member of the Dans, noticed Wicca--hostess of her own horror show--sitting on grain sacks with a  notepad. "What are we up to, Wics?"

"Slogans for Jiffy Mart." The chain was one of the show's sponsors back in L A, among the group who didn't mind how she massacred the commercial spots. It brought plenty of name recognition from the hipsters who plastered it all over YouTube. "How about this one: Savings you deserve, quality you don't."

"Then what about this pain pill: Seventy percent less pain versus sixty-nine percent on placebo."

"I'd say that isn't what they want the public to know."

Wicca cast the notebook aside. "How do ad execs deal with the whole asterisking thing?"

"You know, that word all over the internet. Four asterisks followed by 'ing'. You Earth people are so lazy. Can't even make the effort to spell 'asterisking'."

Zena poured hot water into a tripod filter for the coffee. "Wow. Over here, she can like curse a sailor under the table, but on Earth she's clueless."

The dwarf Hecabano, the show's sidekick, ambled over. "A most apt choice of avian, Fatima of Farce."

"Really, Impo? How about a little of the poetry you like so much. Facilis descensus Averno."

Hecabano eased behind Ed for protection. "Virgil, Master Ed. It means easy is descent to the  netherworld. Not that she hasn't tried to send me there many times. Heh!"

Ed held arms out to separate them. "Enough with the doomsday poetry. Let's get this stuff unpacked."

Somewhat bored by now, Wicca began mixing the day's supply of stain for doing microscopic analysis of blood slides. That was the sole province of Zena, a former lab hematologist. With it, she could diagnose ailments like anemia, high white cell count in fevers, allergies (indicated by an orange cell called eos), parasites, even sepsis (dark granules on the scavenger cells). It was a cheap alternative for folks who couldn't afford magical healing.

Wicca shrugged. "Just going by the directions on the wall. If it's effed up, make more."

"Wics--" She might be clueless on Earth, but viewers weren't. "Family show, remember?" 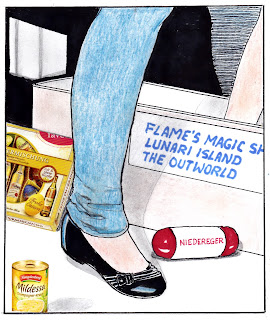 Posted by Nick Nuko at 8:10 AM
Email ThisBlogThis!Share to TwitterShare to FacebookShare to Pinterest