The Case of the Vanished Man

In Kensington there stands a manor which shall remain nameless, for reasons to be revealed later. The master of the house stood accused in the disappearance of one Cyrus Hampstead; both men were known to be bitter rivals for the affections of a certain woman. Dogs were called in, having lost the trail at the end of an upstairs hallway. Yet Scotland Yard knew there was no such thing as a dead end when it came to Sherlock Holmes. Holmes insisted on seeing the exact spot the trail was lost, marking it with chalk. Even so, the suspect, Lord Wellesley, remained boastful that no one should ever get the goods on him. Nullus Corpus, as it were--no proof. It is here that our tale begins.

"Smug popinjay," I huffed. "He has the air of a man who has committed the perfect murder."

"It's my own sentiment as well," Holmes said. "Attend." He stomped vigorously on a step about halfway up.

"How very curious." I performed the test for myself. "There is no hollow boom. It's as if the thing is made of stone instead of wood."

"Quite so, old boy. We shall make a detective of you yet." Holmes nodded to Inspector Lestrade, who waited at the top of the stairs with Wellesley. Lestrade led the suspect out of sight down the hall. Having been briefed the previous day, I went up to join them at the spot Holmes had chalked. Strangely, the corridor was a dead end, save for a pair of guest rooms on either side.

A brief interval passed, and what was my astonishment to see Holmes coming up the stairs backward!

Lestrade scowled. "See here, Holmes--I've learned not to question your oddball methods, but this is too much! What do you expect to accomplish by walking backward!"

"If I'm right, Inspector, I expect you to make an arrest."

None of us spoke right away. Wellesley looked positively ill.

"It's a queer thing," I said. "When you came up in reverse, I had the disorienting thought that time itself was moving backward."

"The final trigger," Holmes explained, "though it has little to do with time. It's only necessary to awaken the progenitor mind, that primitive part in tune with that which cannot be seen or felt.."

Holmes glowed like a school boy. "Our own minds have set in motion the arcane machinery entombed beneath us. I'd never expected to see one--a set of Euclidian stairs!"

"Entombed," you say. I waited for him to continue.

"Legend has it that a large gyroscope spins in opposition to earth's rotation, operating as a true perpetual motion machine. I'm loathe to delve too deeply into the occult aspects, but the manor's original owner knew an airtight seal of the chamber is essential. If our two realities should collide, the resulting explosion--"

"Hallo!--" Lestrade drew back from one of the rear doors, which had begun to grow translucent. It winked out of existence, admitting cold and foul wind from a barren chamber within. It was no longer a well-appointed bedroom. Lightning flashed at a tall window, illuminating a gray nightmare world of blighted wood and tattered drapes. Nothing else occupied the cursed space--except for the man crawling toward us.

Holmes beckoned urgently. "Quickly, man, come out of there! The breach won't hold for long!"

Clearly the man had been shot. No sooner had we dragged him clear did the door come back into existence behind him. He raised a trembling hand to point accusingly. "Wellesley. . . ." Then he fell dead.

Wellesley closed his eyes as does a man facing the gallows. A sick grin came to his features.

Holmes took hold of the dead man's arm. "Help me turn him over, Watson."

"No matter," Lestrade said. "We have our man. There's nothing more this poor devil can tell us."

"Except," Holmes pointed out, "what Lord Wellesley finds so ironically amusing. What do you make of the wound, Watson?"

"I'd say it cut the right renal artery, causing rapid blood loss, though not so catastrophic if the descending aorta had been hit. It bought him an extra moment or two."

Holmes looked up at the killer. "Your arrogance has undone you, Wellesley. You didn't go for a kill shot because you wanted the victim to be some hours in dying an agonizing death. You overlooked a prime characteristic of Euclidian stairs: they always return to the same point in time as the prior visit. It wasn't days ago that you shot Hampstead, but mere seconds!"

"Away with you, now." Lestrade hustled his charge downstairs, his reputation once again riding the coattails of Sherlock Holmes.

I stared at the door. "I suppose we should alert the science ministry."

"Nay, old friend. We can't have adventurers coming here for some infernal thrills. When the lightning flashed, I saw something at the window, which clung to the outside. I didn't get a good look, and for that I shall ever be grateful."

I nodded. "Some things are best forgotten."

We made our way down as two policemen came to collect the body. Wellington's maid inquired as to whether it was safe, having overheard the proceedings.

"Quite so, my good woman," I assured her. "But do not go up these stairs backward." 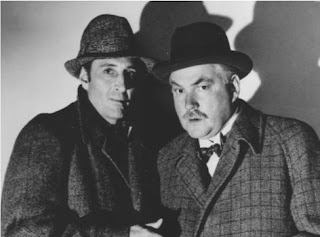 Posted by Nick Nuko at 8:08 AM
Email ThisBlogThis!Share to TwitterShare to FacebookShare to Pinterest