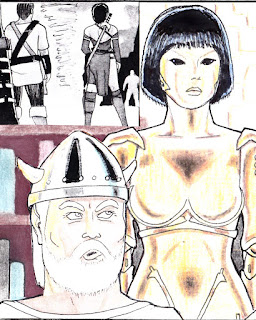 The figure kept going through Ed's mind like a snatch of forgotten song. Why had it popped out of the dusty archives? What did it mean?

"Close. Three sparrows. All of them went in before one of them tripped the bait tray and dropped the door shut."

Ed had some initial success carting the nest raiders off to a golf course. Lately he'd scored some unwelcome guests. There was a foul-smelling possum who bared sharp teeth at him; a rat who ate the peanut, shell and all (the sharp wood fibers had finished him off); and every bird to be found in the Audubon guide.

Wicca came out of her room, still wearing a sleep shift. "That's easy. You've caught all the squirrels in the state."

"Is that still rattling around up there?" Wicca demanded. "All day yesterday while I was trying to watch the Stooges. . . ."

"Have no worry, Menad of Misery," Hecabano said. "When dealing with a brain defect, one consults a computerized brain. I have summoned the Bot queen from the studio."

"Now we'll get answers!" Wicca gave Ed a little head smack. "Are you sure you can't pin it up?"

Wicca bopped his head. "Will you start that again?"

"I'll get it if you don't knock it back into cold storage!" Ed massaged the back of his head.

Presently the gold automaton came in and was apprised of the problem. She did a nanosecond web search. "It is the designation of a loan for a 1985 Mustang you purchased in 1992. It is a curious thing to remember."

"Now I recall it!" Ed jumped up. "I had to write it on the checks, so I memorized it. That was easier than looking it up in the loan document. But why did it come back?"

Hecabano called from the kitchen. "I perceive your memory to be fine, Master Ed. Perhaps we could work this into a comedy routine at the studio tonight."

Posted by Nick Nuko at 8:39 AM
Email ThisBlogThis!Share to TwitterShare to FacebookShare to Pinterest