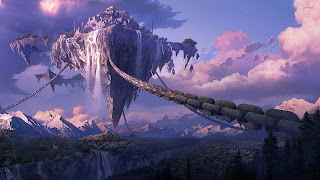 Previous: Team Dan jumps into the dark realms, burdened by a prophecy about infighting.

As an ill-fated guard plummeted past, Pete came in view down the side of the floating city, rapidly pulled up by Jili's magic cord. "That's good enough," he called. He clambered over the side of the old airship dock. "Hell of a place for a teleport down there--on a ledge carved into the Tekniker stone. Only a bird could reach it." 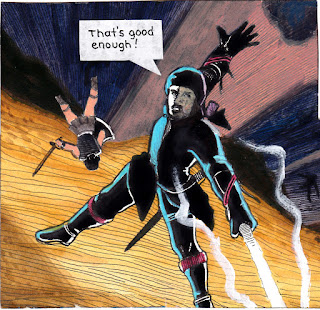 "That's why no one knows about it," Jili said, doffing her witch disguise. "I couldn't use it, not knowing any destination codes."

Dan's collar lifted in the frigid moan of updrafts from the horseshoe void. It provided space for airships of old, which had given way to the age of the dragon. He pointed to a massive chain attached to surrounding mountains. "I take it this station can't move anymore, so they make sure the wind won't blow it around."

"Like, deja vu!" Zena enthused. "I wonder if this one has a regular ghost ferry from Bodley Manor." She took some images on her pad. 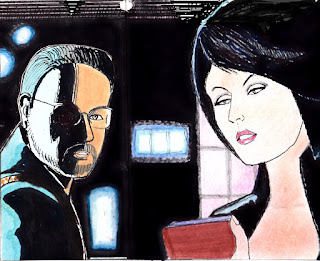 "Are you saying," Jili said with sudden interest, "the ghost ship can be boarded?"

"So there is one," Pete noted. "That's how we reached a different floatin' city. Hell of a ride. The question is where this one sails from."

Dan looked across where chains clinked over some smashed crates. "Looks like this place saw some trouble. How'd you escape here, Jili?--seeing how you grew up here."

"I didn't. I was abducted by a Red Claw strike force."

After a moment of surprise, Ed stated the obvious. "Then you escaped from Eolca, and ended up in Khot."

"Let's not get ahead of ourselves," Dan said. "Why did they kidnap you?"

"Their orders were to kill me, because the Eolcan Sybils prophesied I would one day destroy the empire. But a secret cabal wanted to use me against the dark realms."

"So why are we here?" Dan demanded.

"I'll need recovering from the ground, because that's where my business is, and I doubt you'll agree with my plan." From her palm she blew dust that staggered Ed. A tossed pouch released a spell of confusion.

When the stars cleared, Zena rose. "She took the emergency flight suit from Ed. And the scry disk from Bonnie."

Bonnie surveyed the deepening gloom in the snowy valleys below. "Unless we conjure Cambris and Stheno for a ride, all we can do is wait for Jili's signal."

"Well, crud." Dan joined her. "We're nobody's taxi service." He pondered their own prophecy from the Well of Souls. "If that was the infighting, it could have been worse."

"It might be worse," Ed added. "You know we gotta go down there and see what she's up to."

"Then we'll get ready." Dan tapped a steel canister, letting Cambris know it was dark enough to come misting out. Bonnie summoned the gorgon Stheno in human form.

"Impudence," the young princess said. Her serpents undulated restlessly. "You have brought me to a cold place, leader man, unlike the sunny clime of Greece."

"Cold is nothing," said Cambris, "compared to my embrace. "Let her who went below have a good reason."

Dan summoned the three fairies from the ring. "First things first. The fairies have to find Jili. Then we'll all go down and have a chat."

Posted by Nick Nuko at 10:09 AM
Email ThisBlogThis!Share to TwitterShare to FacebookShare to Pinterest