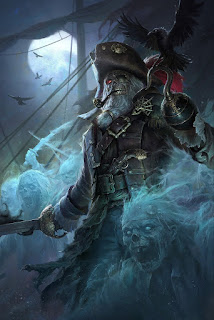 Our only maritime case of greater strangeness had involved mermaids. We'd not normally investigate a missing ship, save for the fact that Sherlock Holmes was requested by none other than the missing captain.

Mr Colton sat neat the sunny window here at Baker Street, dispatched by the Home Secretary. He fretted with a bowler hat in his lap. "The ship in question is the Manitou. Her crew ran our blockade of Napoleon, because the Illuminati favored a greater European dictatorship."

"Ah yes." Holmes fired up his pipe. "I've often delighted in defeating their evil schemes. But we know the ship isn't really lost, don't we."

"Quite right; we have it trapped a few miles off Land's End."

"Trapped?" I set down my tea mid-sip. "You make it sound as if crewed by pirates."

I started to laugh, then remembered the case of the succubus. "I can imagine the mischief they could be about. How does this involve us?"

"Quite simply, it's Captain Weehauken who wants a meeting with Mr Holmes." Colton displayed a photo of a captain's hat apparently floating in a ship's cabin. "They manifest through physical objects, their spirits not being captured on film. The captain was privy to Illuminati secrets he decided to profit from, with predictable results. Then he and his dead crew were brought back by some unholy means to serve the masters they had betrayed.  As years went by, the crew threw off those shackles, coming and going in a mist."

Holmes listened closely. "That would make them ideal smugglers. I presume the captain wishes to impart his dangerous secrets to me, hoping to even the score."

Colton made a deferential nod. "Very astute. The Admiralty is equally intrigued, because nothing these people do benefits anyone but themselves. Besides, we can't be certain how long we can prevent Weehauken from carrying out his threat to go 'canker barrels' on the world."

"It has something to do with spoilage of ship's stores. In other words, he threatens to go ape dip on the high seas, whatever that entails."

Holmes stood up. "Then we mustn't keep the captain waiting."

We still didn't know why the captain was so eager to spill the secrets, or what he expected us to do with them. But when it came to Illuminati, the less one knew about them, the better.

Posted by Nick Nuko at 5:43 AM
Email ThisBlogThis!Share to TwitterShare to FacebookShare to Pinterest