Easter Eggs Then and Now 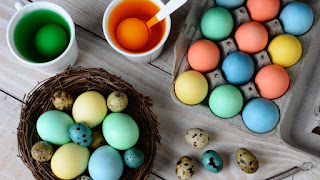 The upper right is how most remember the old days of egg dyeing: the smell of vinegar, the wire egg holders, dipping them according to how dark the desired color was. Don't forget the wax pencils for areas that didn't absorb the color. You could also make two-tone eggs, half and half. Then there were the baskets. Most had shredded plastic 'hay' of green or yellow. Jelly beans, chocolate bunnies and yellow marshmallow chicks rounded out the recipe of this appetite wrecker (forget lunch).

Hiding and hunting for them was also an adventure, but watch out for squirrels--one was seen gnawing on a plastic egg to get at the candy inside. Lastly, there were the prized ones to be saved. Decades later, you could take this one out and gently shake its feathery weight, but no sound emerged from the bit of dust inside.

Posted by Nick Nuko at 7:45 AM
Email ThisBlogThis!Share to TwitterShare to FacebookShare to Pinterest