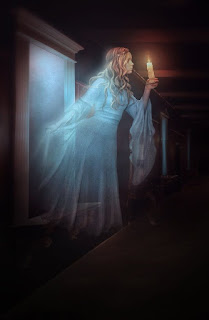 Previous: paranormal instigator M Galwaith prepares for a coming storm at the old Bowdler Manor, one which brings with it more than just dry lightning.

I had arrived before the day was far advanced. The dusty and cobwebbed ballroom lay neglected in the wan glow from overcast skies. The storm blew up quickly, and would soon be upon us--me and my spectral opponent, unerringly drawn by nature's darker moods. My sole preparation was to place a letter opener on a side table I had righted. Nothing else presented as a potential weapon for my foe, since I had tossed out glass from broken panes.

Leaves skirled in a rising wind that brought  no rain. Thunder rolled across sinister cloud shapes that pulsed with lightning. Darkness came to the room, whose only illumination came from the nearby lamps of the new manor.

A fantastic display of fork and ribbon streaks gave me a chance to scan the space--and there she lurked, a dark shape at the staircase wall. The obligatory thunder rattled some surviving panes at the patio, a place I was loathe to venture far from.

The folly of that decision soon evidenced itself. I turned at the next glare of lightning, confronted by a face of such sepulchral horror that I quite forgot my weapon, lashing out with a strangled cry. But my arm met nothing by witchy laughter. I must regain control before Jenny found the letter opener.

I began a dance with an imaginary partner, known to be Jenny's romantic rival. "We must be discreet, Matilda, so Jenny doesn't find out about us." I slipped a hand into the coat pocked containing my weapon.

As I whirled my "partner" about, I kept keen watch between flashes. One flickering burst picked out Jenny near the side table. Knowing the likely direction of her approach, I braced for the inevitable.

The stab came high to the back, and would have floored me had I not expected it. I pulled out the bladder of holy water and squeezed a spray behind me. The specter screamed and lurched away, enveloped in blue flame that gave off neither heat nor light beyond its confines. Jenny collided with a wall in the attempt to escape, but the holy water could not pass through. She collapsed there and burned to an oily stain.

I slumped to my knees and pulled out the letter opener from my back, having earlier rounded the weapon's point. The wound was therefore shallow. I began to pick my way out of the ruined manor. Mr Bowdler's bill for services was due, though he must delight at being rid of the family "inheritance".
Posted by Nick Nuko at 10:56 AM
Email ThisBlogThis!Share to TwitterShare to FacebookShare to Pinterest