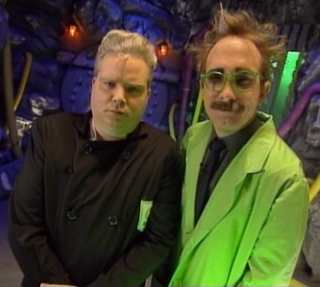 In the lair of Dr Clayton Forrester

Greetings, spacemen. Tonight's offering is bad even by our standards. It's 1964's The Starfighters. It isn't scifi; there are no monsters; nothing happens. Topping it off is the cheesiest dialog and most wooden acting ever seen. Endless scenes of level flight and refueling will have you nodding off, but we'll zap you awake via the seat electrodes! There's even some strafing and bombing of practice targets (which rarely shoot back), even though  other planes were better suited for ground attack.

And the climax? Hold onto your roll bars--it's a faulty sensor! Yes, a pilot reports his landing gear failed to come down, even though another pilot verifies it did. Gasp--could the gear collapse on landing? That's suicide in a tin can like this. As it turns out, the landing is perfect. Nothing ever goes wrong with our planes! Tell that to 115 German pilots who bought the farm in -104 crashes. And now, gents--get into the theater!

(Lights and buzzers herd the panicked satellite crew below) 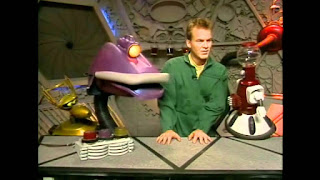 The scene: an Air Force type in dark shades spouts a few lines. Neither head nor body ever move.

Tom Servo: I'm telling ya, these guys are zombies! It's a zombie film!

Crow T Robot: That's crazy. What would they be doing in fighter planes?

Crow: Somebody bail out or belly land. Let's see a fight in the officer's club. I'm dying here!

Joel: It's a recruiting film. Everything has to be rosy.

A crackling sound sends up smoke from Servo's seat.

Crow: How about this--let's get a good war going.

Joel: We weren't in any wars in 1964, and Arizona is too far from the ocean for an ocean ditch.

Tom: Then why are we wading through this thing?

Joel: Dr Forrester isn't gonna break us just yet. The bigger the turkey, the easier it is to riff.

The proof comes when a pilot charges toward his parked fighter. Crow does the Stooge sound effect: woob woob woob woob!

Joel: See what I mean? Fellas, have some popcorn. We're gonna have a blast.

Posted by Nick Nuko at 12:12 PM
Email ThisBlogThis!Share to TwitterShare to FacebookShare to Pinterest