Fred Sanford thrilled to the Wednesday night fights, throwing hooks and jabs from his easy chair. "Git 'im, Dumpster! Stretch 'im out!" Despite the good vibes, he switched off the set when his son Lamont came home from his date. "Hey--did you pick up that old water heater over on DeBusey?"

"Oops." Lamont's grin leaked away. "I got sidetracked helpin' Rollo pick out a leisure suit."

"Big dummy! You done messed around an' let the gobbage man git it!"

Raps at the door provided Lamont a convenient dodge. Two attractive brunettes waited there: one in some kind of Elvira dress, and the other channeling Lily Munster. "Wait a minute, I know you--it's Wicca, isn't it. You had this woman in a gold body suit pretendin' to be a robot."

The other woman's birdlike eyes glowed yellow in the dark; contacts, Lamont figured. "Who's she supposed to be?"

"I am Cambris, impertinent mortal."

Fred trundled around the sofa. "It's that witch woman again. Y'all still workin' on your jive dictionary?"

"Not this time." Wicca led Cambris to the indicated spot on the sofa. "Queenie is the one who's jive challenged. Cambris wanted to check out the TV dimension. She thinks Fred is. . . .what was that quaint expression?"

"Laggard?" Fred started wheeling his fist. "How 'bout I lag one o' these 'cross yo lips?"

"Whoa!" Fred clutched his heart and staggered about, the other arm milling aimlessly. "This is it, Lizbeth! Countess Dracula done come to collect! The Grim Reaper contracted out!"

Lamont took hold of him. "What's all the hoo-ha, Pop? She's only wearin' a costume."

As for Queenie previously, the word baffled Cambris. "What is this 'hoo-ha' of which you speak, Son of Sanford?"

Wicca busily thumbed her pad's stored memory, as this era had no real internet. "I think it's short for 'hullabaloo'."

"Whatever," Lamont huffed. "Why are you insultin' my dad?"

"Don't pop a rivet, Monty." Wicca airily brushed it aside. "She's saying Fred has a potential gold mine if he'd get up from the TV once in awhile. This dump reminds her of mausoleums she once haunted."

Fred scowled. "This broad some kinda poet--Shakespeare in a wig an' a dress."

The object of his pique glided to a tumbled corner display and hefted a vase. "Ah, such over-rained mottlement. I shall take it to Castle Rotbone, there to augment its inundant decrepitude."

Sensing a sale, Fred was all smiles. "A lady of discriminatin' taste. You can have it for fifty bucks."

When Cambris moved other junk aside, the clatter set off a noise-activated bird in a cage, who flapped and chirped with noisesome abandon. She whirled on it with a snarl and blazing eyes.

"Forty bucks!" Fred enthused. Seeing she had no interest, he added, "Or you can haunt somebody else's mausoleum."

While examining the vase, Cambris said, "My inqualmious peace is unshaken, nurseling merchant. Spare us this vegetant acritude, and explain what manner of currency is called 'bucks'."

"Got it covered." Wicca counted out the greenbacks to a once again smiling Fred.

Lamont stuffed hands in pockets, glancing at both visitors."Does she always talk that way?"

Wicca rolled eyes. "Ever since the Crusdaes--whatever that was. We never had them in the Outworld."

"Well," Fred said, counting out the bills yet again, "y'all come back some time, and be sure to bring your purse. Look here, Shakespeare, let me worry 'bout runnin' my empire."

"I fail to summon the requisite misericordia," Cambris enjoined, "for your discommodious servitude to the talking box. It is the underlayment to inebriety." So saying, she sailed regally to the door, followed by Wicca, who turned and spread hands in bewilderment.

"Take that!" Fred crowed in mock victory, shaking a fist. "And a couple o' these!" He boxed the air. "Too early for this Halloween jive!"

Lamont remained somber. "I don't know, Pop. See that bureau mirror over there? She never reflected in it." 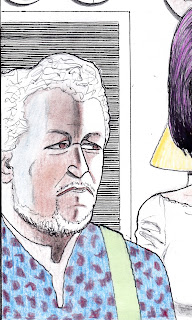 Posted by Nick Nuko at 9:52 AM
Email ThisBlogThis!Share to TwitterShare to FacebookShare to Pinterest