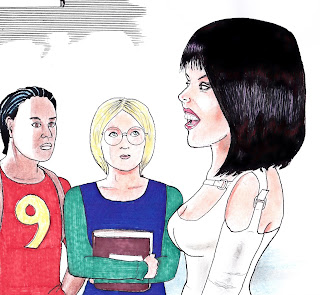 A group of high schoolers milled about the set of the Wicca Horror Show. Having chosen writing from a list of field trip options, they hoped for tips on making it in the business. Their teachers hoped for improved spelling and grammar from the deal. Since this age group knew more about Dancing With the Stars than Hemingway, Hollywood seemed the path of least resistance.

The suits bandied "creative writing" about, but seemed a little clueless about who wrote the actual episodes. They scared up a couple of strange ladies: one in white, and another in a gold robot outfit.

Wicca moseyed up to a boy who had his back turned, placed a finger on his neck. "Bing bang, li'wanna!"

"Translation:" said the gold woman. "That is how easily I could have killed you, Little Wonder."

"Queenie, you overthink everything!" Wicca made goggle eyes. "Give them a break. Now then, kids, what do you want to know about my show?"

After an awkward lull, Queenie said, "Cultural engagement failure. The show is targeted at the twenties and thirties demographic. Beyond that age, viewership declines according to the statistical decay function: y equals y-initial times e to the kt power."

Wicca had a hand over her face, peeked through to end the calculus lecture. "They're here about writing, already. I doubt if they even work those dosiki puzzles."

"You mean sudoku?" a boy asked.

"Same thing--it's all Japanese to me. Give me an idea what you guys watch."

Wicca did a tongue razzy. "Never heard of him."

"What writing? I conjure Team Dan capers from the Outworld via my glass skull."

"But what about the Sherlock Holmes stories?" insisted number 9.

"That's here on Earth, of course. I conjure him from the nineteenth century." Wicca squinted conspiratorially. "Don't tell him I got the Ripper."

The kids looked uneasily to the bot woman to explain.

"To use her quaint aphorism, she essentially 'ate' Jack the Ripper, consuming him at the quantum level to power her time travel."

"Queenie is magic-challenged," Wicca said. "She calls it 'native force', or whatever they call it in Trek Wars. But she's wrong about that--I'm asymptotic!"

"Asymptomatic," Queenie corrected. "An asymptote denotes a point of non-existence for a function caused by forbidden division by zero. These can occur vertically, horizontally, tangentially. . . ."

"Ya ya, forget it, Queenie--they're going glassy eyed!"

The kids huddled while the show people debated derivatives versus crystal balls.

Posted by Nick Nuko at 5:14 PM
Email ThisBlogThis!Share to TwitterShare to FacebookShare to Pinterest