At an outdoor cafe on the boulevard, three of the cast from The Wicca Horror Show settled at a table beneath a black locust tree. Being undead, Wicca disdained solid food in favor of booze, on which she was quite the authority. Fellow Outworld alumnus Hecabano had his usual hero sub and super-size limeade. Patsy was visiting from Outworld to do her standup routine on the show. A native of Earth, she was newly blonde from a combat spell gone wrong, and had never looked back. But the blonde jokes had managed to disappear from her arsenal.

Before diving into a deluxe burger, Patsy consulted a notepad, tapping it with a pencil. "Listen up, men. What do you call a girl who has infectious mono?" To their blank looks she supplied, "A lymphomaniac!"

Patsy made a sour grin. "You non-lab types. Everybody knows that in infectious mono there's an increase in cells called lymphocytes."

"Ahhh." The dwarf Hecabano wore a knit cap to cover his short satyr horns. "A medical-sexual word play. I fear it's too highbrow for Wicca's audience."

Wicca eyed the dwarf's legal pad. "That's why I'm letting you do your dumb poem, Impo."

"Not a poem, Mistress of Malarkey. I call it a moment in time. This is called 'Summer Squall'."  He began to read.

"A susurrate breeze draws me to the small cement square of the back porch. The coming storm rolls stereo boulders across the sky. Dark trees clash and sway against the coverlet gloom. A corner garage light comes on, thinking it dusk. White sprinkles slash across its glow.

Drops patter on the awning overhead. A needling spray drives me from the edge, where I focus on the downspout, intent on seeing the first gush. Peewee the titmouse flits at a peanut, but a brilliant flash-crack spooks him off the prize.

Rain fries overhead, and sizzles on the brick steps. Drat! I've missed the first torrent out the downspout. The leg drenching drives me to shelter behind the open glass door.

In moments, the squall has moved on, leaving cool rain scent in its wake. A comically soaked Peewee darts in for his sodden treat. Orange clouds luminesce an enchanted scene with glazed light. Faraway thunder trails the departing storm edge, and in the dripping calm, a train whistle echoes a jay's call. Memories of church bells from another time, another town. . . .alas, we can't have it all."

"Brave-o!" Patsy applauded. "I can just smell the rain air."

Wicca remained impassive behind the shades. "You need more sleep."

Wicca would have sighed if she had need of breathing. "Well. . . .it is a horror show." 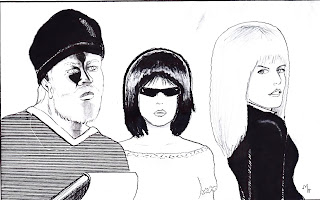