Artificial intelligence has long been a staple of science fiction. The Terminator instantly comes to mind, as do other villains like the Borg and the Cylons. When pondering such a character, it helps to survey what has gone before. We also had Data of Star Trek, representing an extreme of human mimicry, surpassed only by the evil 'artificial' from the first Aliens film. The neurotic C3PO of Star Wars added a comedic touch. The most sultry version was Julie Newmar's Rhoda the robot from 1964's My Living Doll. She played opposite Bob Cummings as an Air Force shrink and her erstwhile caretaker. Going back thirty more years, we have the automaton from Metropolis, who inspired my own version of an artificial humanoid--the Bot queen. She differs in a number of ways: she's driven to clarify errors, offer suggestions for improvement, and translates slang expressions (though she's baffled by jive). All this while awaiting a chance to botify planet earth as its gold-toned ruler.

Another version of AI is the unseen vehicular type whose presence is defined by voice. Smooth-talking male voices filled the role in 2001: A Space Odyssey and the super car in Night Rider. Star Trek progressed from the flat monotone of the original series to the cultured, but still clueless rendition of ST:TNG. Both were slight improvements over the robot phone ladies we deal with all the time, who are curiously hard of hearing. While still impersonal, my spaceship AI version displayed personality through motives: she had initiative not allowed the Trek ladies; was protective of the ship and crew; and allowed maintenance only by a trusted few.

Your own AI character can fill a role in its unique way, depending on how big the part is. Even a 'flat' AI acquires personality through the way it relates to others, intuiting their desires and faults. AI also has the advantage of not needing rest, and it can teleport long distances via wireless media. Decide how much to stir into the mix: humor, ability, integrity, quirks, ethics, initiative--depending on the mission. 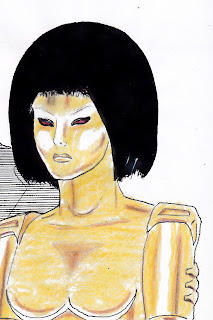 Posted by Nick Nuko at 8:41 AM
Email ThisBlogThis!Share to TwitterShare to FacebookShare to Pinterest