Painters throughout history have made one or more alternate versions of certain works, notably the Impressionist Monet. Even musicians do so: the folksy take of Elvis' I Beg Of You is even better than the polished radio version. It isn't always a search for the best presentation; you also max out the mileage for a given inspiration. If it's good enough to paint, why not do it more than once?

This pair is based on the sixties Gothic soap Dark Shadows. The cliff only needed the addition of Collinwood, the haunted estate the show revolved around. Widow's Cliff got its name from a number of suicides we'd expect from such a place. The best known of these was Josette, when she learned her fiance Barnabas was a vampire. This of course created Josette's ghost, an obscure figure who influenced a number of future episodes. One of the best dramatic scenes was near the end of the series, where Josette appears to Barnabas and bids him farewell.

Dry blends are used throughout these pictures in keeping with the Impressionist feel. Sometimes it's hard to decide on a horizon color, such as on the right side. Orange or lavender? Well, orange would compete with the orange on the left side, but we still need some to extend across the sea. One solution is to paint in the orange, then overlay with a thin wash of lavender, letting some of the orange peek through (who says you can't have both).

These are 9x12 acrylics, titled Widow's Cliff Blue and Widow's Cliff Mauve. The latter has a more ominous, pre-storm feel. Check your inventory for works just begging for an evil twin or two. 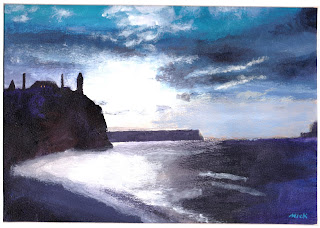 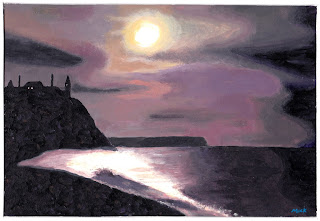 Posted by Nick Nuko at 8:13 AM
Email ThisBlogThis!Share to TwitterShare to FacebookShare to Pinterest