Queens of Studio B 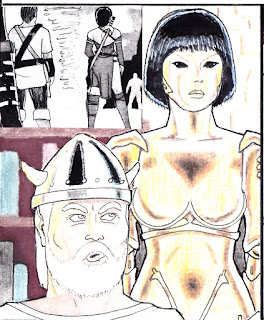 Being the chief meteorologist for weather station W-AMOK meant a certain prestige for Glenda Mason. Except for that one day each month when the segment aired on the set of the horror show. The diva, to make matters worse, had brought aboard a number of equally crackpot sidekicks. But the show had a profitable cult following the stockholders liked.

Glenda's protest ended with the manager thumping his copy of her contract. Resigned, she ventured into the second-floor studio, where her producer had set the monitor for a map of California. She forced a smile for the cameraman. "Good morning from the set of the. . . .Wicca Horror Show. Today's weather report is courtesy of Ashbury Conglomerates. Here to introduce our sponsor is the show's host."

"Hostess." No one would argue that, given Wicca's vampish black stage dress. "Don't buy your conglomerates--whatever that is--from anyone else. Before we get into that, Brenda, didn't I see you flirting with Mr Assberry? Buttering up the old boy, are we?"

"It's Glenda." Clenched smile. "I don't flirt with our sponsors."

The second occurrence of the word opened a door for the cyborg character. "Flirtation: teasing with the possibility of illicit sex."

"I'd never cheat on my husband," Glenda huffed.

"Counter-intuitive," said the gold plated wannabe from Metropolis. "The escalating nature of this activity must lead to eventual mating."

"Now, Queenie." Wicca waved it aside. "This you find a problem, when you have the world on the road to Ragnarok?"

She had to be shilling for her own show. Glenda feigned interest. "Is that one of your horror titles?"

A deep voice interjected. "Tragically,  no." The bearded, helmed dwarf called Hecabano entered the fray. "I told the diva it was a bad idea bringing in the queen of the Bot Star Empire. Despite precautions, Queenie managed to shoot a barb into the station tabby, which proceeded, in her words, to 'target select individuals'. Now the world is hopelessly bottified."

Wicca flung out bejeweled arms. "Oh well! What do I care? Just give me more time to stockpile goodies in the Outworld before it all blows up."

The Outworld already. Glenda called her out. "Now I know you're talking about your show."

But the host wasn't listening. "Queenie, I'm going to find an iron rod and spank your--"

"My database," said the cyborg, "indicates this as flirtation."

Wicca smacked a frustrated hand across her eyes.

"Then I'm confused," Glenda protested. "This is one of your comedy routines. Don't you people ever come out of character?"

Wicca steered her aside. "There's something you should know, Linda. Watch out for anyone with needles coming out their fingertips. But there's a safer way to spot them."

With a knowing wink, Wicca put a finger to the side of her nose. "If it's woke, it's broke." She sashayed back toward the set.

After mixing up with these kooks, Glenda had quite forgotten to do the weather.

Posted by Nick Nuko at 7:45 AM
Email ThisBlogThis!Share to TwitterShare to FacebookShare to Pinterest