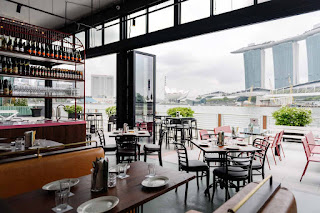 The Seafood Shack fronted a harbor street wreathed in bright mist. Ed and Patsy cast early morning shadows on street puddles as the sun speared through, its light throwing dancing ripples across windows.

"What are you doing?" Patsy watched Ed pull a flyer off a stop sign; it was one of the ubiquitous 'we buy houses' come-ons from the hardship profiteers.

"You'll see Maestro." He poked fun at her stage costume, a tuxedo jacket and skirt, worn for tonight's standup routine on the horror show. When they went in, Ed waited for curious eyes to dismiss them, then taped the flyer on the wall of their booth. Now the profiteers would get in trouble for unauthorized fishing. Or phishing, as it were.

Patsy slid in, tossing thin blonde hair behind her. "Ed, you're an even bigger cynic than I am."

"It's the only way to go. Optimist types are always getting disappointed. But when something good happens to us, it's a pleasant surprise. Like when I won the studio contest last week."

"What was that about?" Patsy made room for the menus set down by the waitress. Ed had his usual catfish, slaw and hush puppies. The slender Patsy had more of a thing for tuna salad, the least adventurous luminary in the seafood pantheon.

"It was picking out a Roman name. I went with Optimus Maximus Superbus. You can't get more ostentatious than that."

"Huh? I thought that stood for bachelor of science. I'm from the Outworld, you know."

Watching this byplay, the waitress commented to a co-worker. "Ever seen such a cynical pair? The girl acts like she's from another planet."

Posted by Nick Nuko at 4:56 PM
Email ThisBlogThis!Share to TwitterShare to FacebookShare to Pinterest